A 44-storey tower is an ambitious project for any major Canadian city. But in Winnipeg, it’s unprecedented. 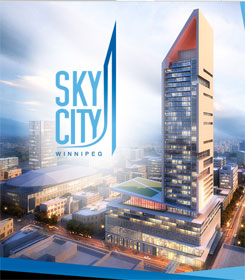 So it’s hardly surprising the announcement of SkyCity Centre in downtown Winnipeg has garnered plenty of attention even before the first condo unit has been sold or shovels have started in the ground.

Spearheaded by Fortress Real Developments, the multi-use skyscraper will be the tallest structure between Toronto and Calgary. And it will serve as an architectural beacon that the Prairie city’s long-awaited urban renewal is well underway.

After several years of little in the way of major private commercial development in downtown, the city is experiencing a renaissance, says Ben Myers, senior vice-president of market research and analytics with Fortress Real Developments.

And Fortress — largely a Toronto-centric realty company — wants to be at the forefront.

“People want to be downtown”

“We just feel that people want to be downtown, and the return of the Jets has really been a catalyst for that in Winnipeg,” he says about the NHL club, which plays at the city’s downtown arena, the MTS Centre, built almost a decade ago.

“We think our project will be that spark for additional growth.”

With construction pegged at $200 million, SkyCity will feature about 380 condominium units, retail space on the first floor, and a grocery store on the second floor.

While the concept is nothing new for most major cities, this type of development is novel to Winnipeg, adds Kersey, SkyCity’s project manager.

In the last decade, financial incentives and other government sponsored initiatives, like The SHED (Sports, Hospitality and Entertainment District) designation, have made projects like SkyCity, Glasshouse and d Condo — all high-rises planned or under construction in downtown Winnipeg — economically feasible, Myers says.

And the financial support is substantial. Earlier this year, the city and provincial government jointly announced a grant program for residential development totalling $40 million, or about $40,000 per condominium unit.

Although these incentives make building in downtown Winnipeg attractive, what’s garnering the attention of Toronto firms like Fortress is that the price is right — at least compared to other major urban centres — even without the grants.

“The difference is developers look at downtown Toronto with a condominium cost of $600 to $700 per square foot, and they don’t see it appreciating like it has before,” he says.

“Our project (SkyCity) will be in the neighbourhood of $400 per square foot.”

Still, urban living in downtown Winnipeg, which has a somewhat tarnished reputation in the eyes of many of its suburban dwellers, is an unproven value proposition.

Confident in the metrics

But Myers says Fortress is confident in the metrics behind its project.

“There’s been this massive explosion of condominium activity in Winnipeg,” he says, adding Fortress believes this will continue for the foreseeable future.

“Based on our research, there actually is a lot of interest from buyers that are living in suburban areas in larger homes who want to downsize and to take advantage of the level of amenities that isn’t offered in any other type of residential development in the city.”

Indeed, the city’s condo market has been red hot of late. Multi-family starts in the city grew by 46 per cent in 2012 and 28 per cent in 2013 — though CMHC forecasts growth will level off this year and next as supply increases. Still, the agency expects demand will remain strong, driven by immigration, first-time buyers and empty-nesters.

In addition, Myers says Fortress will be actively marketing the project to investors outside Winnipeg once sales start, anticipated to be in the spring.

“The rental market in Winnipeg is really strong,” he says. “Combined with the square-footage rates, it’s very attractive to investors.”

Of course, the focus remains on local buyers from all walks of life, from first-time owners to high-income earners.

“The smallest units will be just around $200,000,” Myers says, adding buyers will have 11 different floor plans to choose from.

“And penthouses will be $1 million and up, and totally customizable, so if they wanted 3,000 to 4,500 square feet over two stories, we will accommodate that.”

With construction expected to begin in 2016 with a 2019 completion date, Fortress is anticipating SkyCity will need pre-sales of about 150 and 200 units to get project fully underway.

Mady’s Kersey says the fact the project is unique to Winnipeg should drive substantial interest from advance buyers.

“This is an iconic, distinguished design for downtown Winnipeg that will look like no other out West,” he says. “And it has to be that way to lure people downtown because people in Winnipeg only have limited experience with the urban living concept.”