Real estate buyers will need to be better operators: JLL

Real estate investors have been the beneficiaries of a two-decade decline in interest rates but with rates expected to trend upward again, buyers need to be pickier and focus on operations even as the prospects for landlords are improving along with the U.S. and Canadian economies. 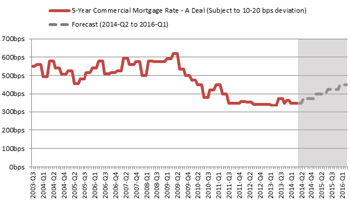 That is one of the conclusions that can be drawn from Jones Lang LaSalle’s recently released report on Canada’s debt market Commercial Property Financing Renaissance. (The adjacent table is sourced from JLL Debt Capital Markets and referenced in the report.)

“Rates have been declining pretty much every year for 25 years and going forward we are looking at a reversal of that,” said Amar Nijjar, vice-president and practice lead with JLL Canada’s Toronto office. “Borrowers will have to have some readjustment: buyers will have to see a different type of financial modelling and rely more on income growth than just cap rate-related appreciation.”

The JLL executive said the pressures behind rising bond yields and interest rates are also good news for real estate operators in general.

“They are rising because inflation is getting up and unemployment levels are going down. Those are the two key metrics. That means the tenants in industrial buildings, office buildings and retail centres, they are all doing well because with lower unemployment people are spending money and with inflation up they can get the prices up, profitability is higher and landlords can squeeze extra rent.”

The U.S. Federal Reserve, which sets the direction for interest rates in much of the world, has a new chair in Janet Yellen but JLL does not expect the change in leadership to trump the underlying reality rates have only one way to go. “They have no choice but to start raising the rates because overall the housing recovery is good, unemployment levels are better and inflation is edging up,” said Nijjar. The Fed’s levels of debt are also unprecedented and unsustainable.”

He expects a period of slowly rising interest rates, driven by the Fed.

“In our opinion, rates will go up and they will go up in little quantums. The Feds will come out with a statement in September or October and the rates will jump by 25 bps and then they will do it again in January or February.”

Bond yield increases will compress spreads across all real estate sectors, he added. “It will impact everybody equally because that is going to move in tandem across different sectors.”

The one possible exemption is the multi-family sector which has benefited from subsidized lending by the federal CMHC body, in effect securing loans that are about 100 basis points lower than those available to office or retail lenders through conventional lenders.

He expects that CMHC benefit to tail off given it is exposed to approximately $600 billion worth of insured mortgages.

“I think that gap of apartment financing versus other property financing will narrow, which means that it might have a bigger impact on multi-family as their margins are compressed as cost of borrowing is proportionately higher than other sectors.”

JLL’s tracking of returns from 2007-12, a period that covers the Great Recession and subsequent recovery, shows that Canadian real estate did very well over that five year span. Of 15 developed countries, Canada was second only to South Africa with total real estate returns of about nine per cent.

Canada will be hard-pressed to outperform countries such as the U.S. in the near future, but JLL noted that the fundamentals of the Canadian commercial real estate market “remained solid, with conservative borrower leverage, prudent underwriting criteria and relatively balanced supply and demand levels cited as the primary drivers of the industry’s resilience. As a result, allocations to commercial real estate financing in 2010, 2011 and 2012 continued to steadily creep up.”

The JLL executive said that while the REIT sector was hit harder by the Fed rate increase scare in the spring of 2013, that part of the real estate universe should weather a future of slowly rising rates better this time.

“It will still have some impact but at the same time everybody has so much confidence in real estate and so much money is flowing that in the long run they are going to be fine.”

A strengthening lending environment is also “very favourable” for non-traditional real estate sectors such as hospitality, long-term care and self-storage.

“Anything that is specialized like that in the past was very tough to finance. With CMBS lenders, with foreign lenders, with some credit unions forming some syndications it is getting easier. So it is good news for those guys,” he said.

JLL sees a “renaissance” in mortgage origination levels, “both in the U.S. and Canada, reaching the momentum that was seen in 2004. As U.S. economy is rejuvenating – vacancy rates are steadily coming down, rents are going up and incomes are strengthening. This has had a positive impact on debt servicing ratios and collateral values; and as a result the commercial lending space has reawakened.”

JLL highlighted a number of key facts in its look at Canada:

• The Canadian big five banks in 2013 had on average an increase of 13 per cent in their production levels, compared to 2012 levels;

• Given the 100 bps discount of Canada Mortgage and Housing Corporation’s (CMHC) insured multi-family financings, there has been a very strong demand for this product. However, CMHC has enacted a cap to limit the amount of new National Housing Act Mortgage-backed Securities (NHA-MBS) per issuer. As a result this is the only sector of CREF that will see a relatively higher pressure on mortgage coupons. JLL also expects further regulatory changes restricting available capital to this sector;