The company looking to jumpstart new development on historically significant islands in the Ottawa River calls itself “Canada’s greenest developer.” 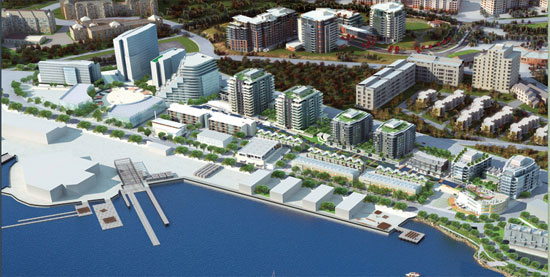 Ottawa-based Windmill Development Group recently announced that it has signed a letter of intent to buy land owned by paper and pulp producer Domtar Corp. on the Chaudière Islands, a site in the shadow of the Parliament Buildings that spans both sides of the Ontario-Quebec border.

It’s an area with a rich history in terms of First Nations, English and French cultures, as well as being a place where some important industrial activities have taken place over the centuries in terms of the log trade and generation of hydroelectricity.

Company officials have since refrained from discussing plans for Chaudière until a deal with Domtar is confirmed.

Walking the talk on green building

Windmill Developments was founded in 2002, founded by brothers Jonathan and Jeff Westeinde, along with Peter Busby.

“The genesis of the company was, I think, a little bit of frustration with how real estate, in particular brownfield real estate, was being developed,” Jeff Westeinde said.

He was previously head of Quantum Murray LP, which he said was Canada’s biggest decommissioning firm and provided services to a number of Fortune 500 firms. Westeinde said he became increasingly disillusioned with the things he was asked to do by clients.

“We looked at what they were doing and sort of said, ‘Here we are supposed to be cleaning up the environment and what we’re doing seems very counterproductive.’ Things like digging soil out of Hole A and moving it to Hole B, which happened to be a landfill.”

He said his experience in brownfield development, his brother’s expertise in real estate financing and Busby’s architectural skills have meshed well, along with the commitment to green development practices shared by all partners, which also include Alex Speigel, Rodney Wilts and Scott Demark.

Westeinde said that, despite a lot of “lip service” to the environment, most of the development industry falls short on environmental performance.

“In fairness to the real estate sector, we are not very progressive with regards to widespread sustainable construction,” he said.

Westeinde said that because owners are most often not the occupants or managers of their buildings, there’s a lack of incentive to spend more on capital costs to save money on operations over the longer term.

Some of the developments Windmill has done over the years include Dockside Green in Victoria (image above), a 1.3-million square-foot residential and commercial development, and The Currents condominium project in Ottawa that turned a former gas station and dry-cleaning site into a 70,000-square-foot structure that houses condominiums and the Great Canadian Theatre Company.

Windmill says it has achieved LEED platinum certification on all of its mixed-used buildings. Westeinde says some of its practices include installing green roofs on most structures, using the most efficient utility technology available and ensuring its buildings are “exceptional” in their insulation.

The company strives for a “triple bottom line,” according to Westeinde: “People, profit and planet.”

On the “people” front, Westeinde said the company builds things that are widely supported in surrounding communities. Some opposition is inevitable, but Westeinde said Windmill makes efforts to give communities what they want whenever feasible.

He noted how the firm’s plan for 12 storeys on The Currents condo project was not initially supported by community groups, who were informed the height was necessary to ensure the project was economical. Windmill also asked community leaders for feedback on making the project more attractive.

“They said, ‘We really want to be an arts-and-culture neighbourhood. We want to be the centre in Ottawa that artists would come to,’ ” Westeinde said. “So we started working with the GCTC — the Great Canadian Theatre Company, one of Ottawa’s most successful live theatres — and attracted them to the site.”

Respect from the industry

Members of Ottawa’s development industry are happy Windmill Developments is coming forward with a plan to develop the Chaudière Islands.

“When I read that (Windmill) had a letter of intent with Domtar on probably one of the most under-utilized, wonderful assets the city has here, I literally was excited,” said James McNeil, former vice-president of Cushman and Wakefield Ottawa who is currently forming his own real estate brokerage, JJ McNeil Commercial Inc. “(Windmill Developments are) the guys that have the ability to make (Chaudière) into something that’s really spectacular.”

That vote of confidence was echoed by Mark Brandt, an Ottawa architect promoting a vision of turning the islands into an eco-district.

“I can’t say enough good about Windmill,” said Brandt, who singled out Victoria’s Dockside Green as a prime example of their work. “It’s generally seen as a key, go-to property when one’s giving examples of greening.”

Brandt said he’s “had some discussions” with Windmill regarding his possible involvement with its Chaudière development. With 37 acres included in the potential sale from Domtar, it would represent most of the 45 acres Brandt has included in his eco-district proposal that features about one million square feet of development and the preservation of 30 existing structures, which Property Biz Canada featured in an article last year.

“I can’t think of a better fit,” he said. “They’ve talked in the media about heritage conservation. They’ve talked about beyond–platinum levels of green. In my view, these are really admirable goals and really appropriate for this really significant site.”