Angels to help a new generation of real estate developers

A group of angel investors and the Fonds immobilier de solidarité FTQ have teamed up to help create a new generation of real estate developers in Quebec. 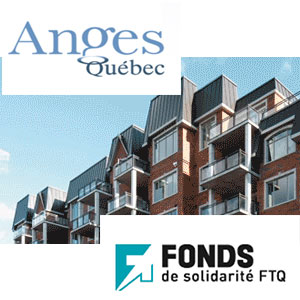 The deal with investor group Anges Québec “will allow for the emergence of a generation of rising developers and support existing developers who need more liquidity,” says Normand Bélanger, president and CEO of the Fonds immobilier de solidarité FTQ.

Under the deal, Anges Québec will provide coaching and capital, while the Fonds immobilier will contribute capital and real estate expertise.

An alternative to start-ups

Anges Québec was looking for other opportunities after investing more than $50 million in innovation start-ups in the last six years, says Pierre Ferland, vice-president, real estate at Anges Québec.

A survey of its 180 members found 90% were interested in real estate and Ferland was asked by board members to explore opportunities.

Ferland was the former president of Groupe Maestro, an organization created in partnership with Cadim, a real estate subsidiary of Quebec’s pension fund manager the Caisse de dépôt et placement du Québec, and has been involved in more than $3 billion worth of real estate transactions over the last 15 years.

Ferland sought out the Fonds immobilier, which he calls “the biggest equity investor in real estate development in Quebec,” as a partner. “They have capital, they have a network, they have great people.”

The projects that will be backed will primarily range from $5 to $25 million and can be residential, commercial, office or industrial.

So far, two projects are awaiting approval, Ferland says – a $7.5 million condominium project in the Lower Laurentians and a $49 million multi-residential complex in Laval.

Equity in all projects will be shared, with the Fonds having 50% of equity and Anges Québec and the developer having the remaining 50%. The new developers will have to invest at least 5% to 10% of the project cost.

Ferland estimates that about 90% of the projects that will be done with new developers would not happen without the deal between Anges Québec and the Fonds immobilier. Creating a new generation of developers “is exactly our hope.”

Bélanger notes developers often come to the Fonds immobilier and say “Listen, I don’t have the 50% of equity to put into the project.”

When does Anges Québec gets involved?

The Fonds didn’t want to change its business model and was thus unable to make deals with these developers. But with Anges Québec willing to cover the missing portion of the deal, many projects will now be able to go ahead that would otherwise not seen the light of day.

“We’re targeting two types of entrepreneurs,” Bélanger says, “the younger and those who’ve worked for developers or construction firms who are now in their forties and want to go into business.”

The deal will ensure “that in 15 years there are people who’ve gained real estate experience who can replace the Devimcos and Canderels of the world.”

Bélanger expects the arrangement will result in about 10 projects a year and is confident that there will about $100 million worth of projects in the next 18 months.

He says the Fonds immobilier invests in about 15-20% of the projects it receives. While its risks will increase slightly by associating with less experienced developers, Bélanger says the experienced team at Anges Québec will help the entrepreneurs.

We don’t speculate in real estate

“We don’t speculate in real estate,” he says. “If we do a condo project, we wait until we have 50% in pre-sales before starting construction. For offices, it’s 50% of rentals and we’ll keep on doing that.”

Besides, he adds, projects of $5 to $25 million are not exactly in the scope of the Tour des Canadiens, referring to the luxury residential tower next to the Bell Centre that the Fonds immobilier is developing in association with Cadillac Fairview and Canderel.

“These new developers have everything to win (by associating with the two of us.) It’s a great opportunity for these new entrepreneurs.”

Created in 1991, the Fonds immobilier has 38 projects in progress, 43 properties under management, 17 million square feet of land slated for development and $59 million allocated to affordable, social and community housing.

An information webinar will be held Jan. 31 for real estate developers interested in learning more about the investment criteria and procedure for obtaining funding from Anges Québec.