The U.S. economic and political uncertainty around the election of Donald Trump, Brexit and the future of the European Union might have some real estate executives pulling in their horns. 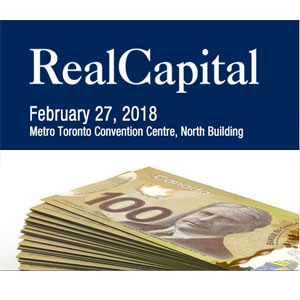 Not so the four executives providing their insights at the closing panel of the RealCapital conference in Toronto this week.

That theme was picked up by Blake Hutcheson, president and chief executive of Oxford Properties Group, which is in the news this week due to the impending sale of the iconic “cheesegrater” tower.

Oxford and partner British Land PLC have reportedly sold the triangular-shaped tower to Chinese investor CC Land Holdings Ltd, for US$1.42 billion in what would be one of the city’s largest ever property deals.

“We had an asset, we built it, we developed it, a crazy number came along to buy it,” Hutcheson said. “Post June 23rd (Brexit vote) you will never see an asset that gets traded at that per square foot price or cap rate.”

The stunning Brexit vote, which cost British Prime Minister David Cameron his job, has had a surprising effect on U.K. real estate.

Trump has had positive effect, too

For all the sound and fury, the election of Trump has had the same positive effect on U.S. markets as Brexit, the Oxford CEO noted.

“When you take corporate taxes from 35 to 15 (per cent) and individual taxes from 40 to 33 and deregulate the 10,000 lending institutions so that they put more money in the system and you are a natural developer who wants your name on stuff and spends on infrastructure – what does it do to your economy?” said Hutcheson.

“It is better today than it was yesterday.”

He pointed to the U.S. stock market, which has surged since Trump’s election.

Money in, money out

“There are clearly foreign sources of capital at work that are messing with our market a little bit,” he observed. “We had the privilege for a very long time of not having to deal with them.

“It was always a combination of competition of the pension funds and REITs, with the private guys playing the higher game among smaller assets. That game appears to have changed.”

His question for the panel: “Can we compete and if so, how and where? And if we can’t compete, do we join them?” by seeking mandates from sovereign wealth pools of capital from the likes of Norway, Australia and the Middle East.

Kalsi, who works with Canadian investors looking at the southern real estate market, said investors have to understand foreign investing is inherently risky.

“There is a huge amount of ‘alpha’ in the country selection of what you do, before you get to properties. I don’t care what your home market is, when you leave that home market, you are taking on more risk in a lot of different ways.

“And then they go to these markets and a lot of times will take on even more risk on top of that.”

That is not so for the cautious Canadians.

“I think the Canadian investors in my experience have been pretty smart in actually not doing that by going out in a very measured basis.”

He marvelled at how Canadian institutional investors have invested in foreign markets in recent years.

“They have to,” Kalsi said. “Obviously Canada is too small as a property market to hold the capital that is being created here. It needs to be exported, just exported intelligently.”

Development, both in Canada and abroad, was a major theme of the panel.

His company is currently building 600 units at Bay and Gerrard in Toronto. The 43-storey tower at 43 Gerrard West is expected to achieve LEED Silver certification.

“We feel very confident that is going to come through. We get good returns, probably a 20 to 30% uplift in value.”

In this case, development trumps acquisition.

“You don’t get somebody excited about buying an asset, a 4-cap, without not a lot of hope of upside,” Finkbeiner said. “You get them excited about doing a brand new building, particularly in the multi-res sector where a lot of buildings are 25 years old.

“Retail is getting scary”

Don’t look for his firm to get into too many big retail developments, at least based on his comments earlier in the panel.

“Retail is getting scary given the number of store closings and Internet shopping. It is not something that I anticipated, that we would see this many store closings. It is staggering.”

The upbeat tone of the talk did feature something of a sobering prediction from Kalsi.

“It has been easier to make money in the last five years than I think it will be in the next five,” he said.