The City of Airdrie, just six kilometres north of Calgary’s city limits, is poised to reap the benefits of a growing demand for residential and industrial land in the region. 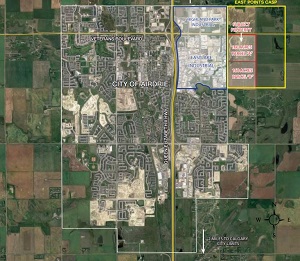 Indeed, Airdrie is perfectly positioned to build on the booming growth experienced by its southern neighbour, the Balzac area of Rocky View County, which sits between Airdrie and Calgary’s northern city boundary.

Chris Saunders, senior vice-president, industrial sales & leasing, with Jones Lang LaSalle (JLL), says Airdrie is still considered a secondary market for most industrial users. First, it is slightly further from Calgary than Balzac and second, there’s been a historical lack of development land.

But that could be about to change. The city annexed 12,640 acres from Rocky View County in 2012, and is now studying how it should best use the land.

“Airdrie lacks larger tracts of developable land and has very limited spec development compared to Balzac, for example,” Saunders said. “But I think its industrial presence will grow in the medium and long term due to its proximity to Highway 2, to Highway 1 and Stoney Trail, its low property tax and no business tax environment.

“In order for that to occur there needs to be more inventory available,” he says, pointing to Balzac as an example of what could soon happen. “If you look at Balzac five, 10 years ago, it was not considered a primary part of our market. But look at its industrial presence now in that area.

“It’s got a significant amount of momentum and that growth will trickle out and benefit Airdrie in the medium and the long term.”

In a few short years, Balzac went from pasture to a booming commercial hub as large distribution centres such as Walmart and Target set up shop.

A few weeks earlier Bentall Kennedy — in partnership with Highfield Investment Group and Hillwood Investment Properties — said they will build a 400,000-square-foot industrial facility on a speculative basis in the High Plains Industrial Park in Balzac. It’s the first major speculative industrial development in the area since early 2015.

Kent Rupert, Airdrie’s Economic Development Team Leader, says the land it annexed in 2012 is expected to provide it with a 50-year supply to accommodate services, amenities and housing.

“Our hub connections are very strong,” says Rupert. “All our industrial parks are five minutes away from Highway 2, so you don’t have the congestion that some communities do.

“And I think the biggest seller we continuously hear is how quickly we can get it through the process. If (development) applications come in complete, we can get projects in and off the ground fairly quickly.”

It’s become a natural extension of the Calgary northeast industrial area; close to the airport, close to transportation infrastructure. Some fully serviced parcels within the City of Airdrie and some of the outer-lying areas are poised for further development as well.

Tracts of land are already going to market. NAI Advent Commercial Real Estate Corp., has listed two, 160-acre properties for sale adjacent to the existing Highland Park industrial area. Though not yet serviced, Advent’s brochure says the land is “earmarked” by the city for manufacturing and distribution centres.

“Just that whole corridor, especially going north, is becoming a lot more relevant in the discussions when we’re talking to clients — talking with tenants, users, that are out in the market, that are looking for alternatives,” Johanesen said.

“Airdrie’s a close drive. Close proximity to the north. No business tax. The low property taxes. All of that stuff sort of gets factored in to the costing and considerations when tenants are out there looking.”

“I’m looking for build-to-suit opportunities and we’re building for our own purposes with respect to condominiums and potentially speculative lease product,” he says, adding that as a larger industrial developer Beedie has a “somewhat unique” position in the city.

“We’ve found surprisingly, especially on our industrial condominium front, that over 50 per cent of the purchases that we’ve had are groups that are moving from the Calgary market,” he said, adding one other benefit.

“From a logistics standpoint in terms of ease of access to both north and south, Airdrie is well-positioned,” Dawson continued. “So if you’re servicing both the northern Alberta market as well as Calgary and south of Calgary, Airdrie is in a great spot to have quick and easy access to both of those markets.

“A lot of it does comes down to dollars and cents and Airdrie, for a lot of groups, makes a lot of sense.”