Hong Kong’s Aoyuan Property Group went international for the first time with a development in Sydney, Australia in 2015. Now it has projects planned for Vancouver and Toronto. 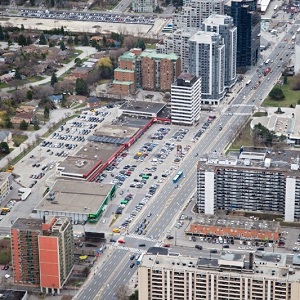 The Newtonbrook Plaza in Toronto will soon be demolished to make way for a mixed-use residential, office and retail community by Aoyuan Property Group. (Image courtesy Aoyuan)

“It seemed like a logical extension from the market in Sydney, that’s very similar in a lot of ways,” said Aoyuan Property Holdings (Canada) Ltd. Eastern Canada senior vice-president of development Vince Santino. “They’re very stable and secure markets, with potential for growth.”

The Granville Project, at the intersection of Granville Street and 7th Avenue in the high-end residential neighbourhood of Fairview, will be eight storeys and have 41 suites.

“We’ll be taking that one to market this year,” said Santino. “The time and date are still to be confirmed.”

The much larger Aoyuan Dawson Street, at the intersection of Willingdon Avenue and Dawson Street in the North Burnaby neighbourhood of Brentwood, will be designed and planned by IBI Group in cooperation with PWL Landscape Architects Inc. It will be developed in four phases into 1,400 condominiums, 50 townhomes and a mix of commercial and retail units.

In Toronto, Aoyuan’s $201-million acquisition of a property at 5799 to 5915 Yonge St. and 46-47 Averill Cr. from Silvercore Inc. in September was the 10th largest commercial real estate transaction of 2017 in the Greater Toronto Area (GTA). It will be the company’s largest master-planned community in Canada.

Aoyuan will redevelop the 8.6-acre site which currently includes an 11-storey office building, the Newtonbrook Plaza shopping centre and a parking lot. The office building at the south end of the property will be demolished along with the mall to accommodate the first phase. A Food Basics store at the north end will be taken down later in the development process.

Plans are for a 1.7 million-square-foot community that will include five residential condominium towers, townhomes, 100,000 square feet of office, 80,000 square feet of retail, a daycare and a community centre. A portion of the land will be transformed into a park and playground. The new community will be 100 metres from the Finch subway and GO Transit stations.

“Development will occur over three phases,” said Santino. “The first phase will have two towers on a podium, with retail at grade and office above the retail.

A range of suite sizes

“The meat of the program will probably be one-bedroom-plus-den and two-bedrooms, but we’re still working on those details,” said Santino.

Santino said it is too early to talk about potential office or retail tenants, but he would like to have a grocery store in the first phase.

The site was the subject of an Ontario Municipal Board hearing. Aoyuan is now working with the City of Toronto on finalizing plans and approvals.

“They know how important this site is going to be for them,” said Santino. “We want to make sure what we bring to market and what we ultimately build is a win-win for everybody.”

Santino is optimistic Aoyuan can launch a sales program later this year and get into the ground in 2019. He expects the first phase to take a little more than two years to achieve occupancy once construction starts.

Aoyuan was founded in 1996 and was the first developer in China to integrate residential real estate with sport and recreation amenities. It has a land bank of more than 200 million square feet and 100 residential and commercial properties in more than 30 cities across China, Australia and Canada.

The company opened its downtown Toronto office, which has 10 staff but is expected to continue growing, last summer. Aoyuan wants to lay down roots and establish its brand name in Vancouver and Toronto before considering a move into other Canadian cities.

“The last six months have been busy, but we’re off on the right foot and are continuing to look for more sites,” said Santino.

“We’re really interested in high-rise sites if we can find them in the 416, but even sites in the 905 and the GTA that are predisposed very well and close to transit and where municipalities are supporting more density.”