Menkes-owned and managed 25 York Street helped transform downtown Toronto’s South Core Business District when it opened in 2009, and it was recognized by Building Owners and Managers Association (BOMA) of Canada with its Earth Award for office buildings at its BOMEX 2016 conference and exhibition earlier this fall. 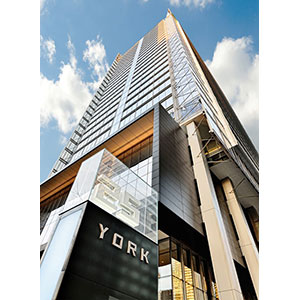 “Since its inception, the vision for 25 York has been clear and consistently delivered on — a continued commitment to community, sustainability and the human experience,” said general manager Gregory Brent. “25 York started as an idea of revitalizing abandoned and environmentally contaminated railway lands with a long-term vision of the development acting as a catalyst for a new community south of the tracks.”

Earth Awards recognize excellence in resource preservation and environmentally sound commercial building management in BOMA BEST-certified properties, and the 30-floor, 786,000-square-foot, AAA office tower stands out in both areas. The LEED EB:O+M Platinum and BOMA BEST Platinum-certified building also won the Earth Award in 2012 and has received several other honours.

“What is especially meaningful is that these prestigious designations speak volumes in terms of the value of the asset to our existing clients, potential customers, investors and other stakeholders,” said Brent.

“We aim to exceed tenant expectations and customer service along with prioritizing the building’s amenities and ensuring our state-of-the-art building features are maintained and operating at optimal efficiency to deliver tenant comfort and minimize operating costs.”

The recycling program at 25 York Street has increased its waste diversion rate from 69.3 per cent in 2010 to 77.6 per cent. Its actions have led it to become one of 20 properties to achieve 3RCertified certification, earning the “Gold” designation, for solid waste reduction.

A fifth floor outdoor community food garden grows more than 800 pounds of organic produce annually, and management is exploring the possibility of expanding it by 1,100 square feet to produce 3,000 pounds a year.

“Food is distributed locally to TELUS employees and nearby food charities,” said Brent. “Our locally grown food is enjoyed while reducing the carbon footprint associated with foods being transported over long distances.”

The property has a 98-per cent Walk Score and a 100-per cent Transit Score, as it directly connects to Union Station and bus and subway routes. It features Zipcar and Bike Share Toronto programs as well as in-building bicycle storage and showers to provide a variety of green commuting alternatives.

The communication strategy was enhanced when 25 York Street became the first building in Canada to install the LEED Dynamic Plaque, which measures, monitors and scores a building’s performance. It’s displayed in the lobby, where tenants and visitors can examine how the building is performing in real time. On the back end, this has resulted in redefining the landlord-tenant relationship as it pertains to roles, accountability and expectations.

“Maintaining leading building performance and occupant comfort requires educating occupants and obtaining their buy-in,” said Brent. “Through new practices of energy monitoring, ongoing commissioning and tenant interface, we moved from treating symptoms to investigating and addressing the root cause.

“We empower our operators to help identify and resolve opportunities to improve efficiencies. They take initiative to speak with tenants and advise them on best practices, in turn helping to educate tenants and strengthen their buy-in.”