Rockland Centre has long been recognized as one of Montreal’s top upscale fashion destinations, and now it’s been honoured as one of Canada’s greenest retail buildings. 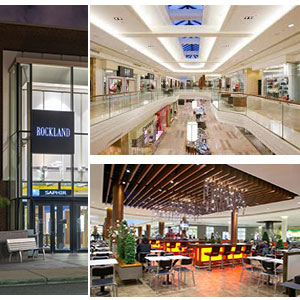 The FPI Cominar-owned and managed shopping centre in the city’s Mount Royal neighbourhood was recognized by Building Owners and Managers Association (BOMA) of Canada with its Earth Award for retail buildings at its BOMEX 2016 conference and exhibition at the Delta Regina in Saskatchewan’s capital.

“Sustainability is part of our culture and it is why we always try to be a leader in green initiatives,” said Rockland Centre general manager Debbie Ruel. “To us, being part of a community means taking actions to preserve the wellbeing of our environment.”

The largely red brick three-floor mall that’s home to about 170 stores and boutiques has more than 2,700 parking spaces and a four-level parking structure, but it’s also easily accessible for pedestrians and public transit users. It underwent major renovations in 2005, which included the introduction of new LED lighting and a lighting scheduling system in common areas and the indoor parking lot to reduce energy consumption.

Rockland Centre has launched a program to replace its existing roof with a white roof containing a solar reflectance index of 70 in order to reduce air-conditioning needs and mitigate the heat island effect. About 20 per cent of the roof is covered now and the entire thing is anticipated to be replaced by 2021.

With the recent installation of 16 Luba GL solar collectors, Rockland Centre will conserve even more energy.

Annual water savings are also increasing, with measures put in place to reduce consumption in housekeeping, plumbing fixtures, dishwashing and landscaping. In 2014, Rockland Centre started a green roof system using two planting containers where plants, cabbages and herbs are grown during the summer. This system, which takes up five per cent of the roof space, allows management to use and retrieve rainwater while reducing heat islands.

Rockland Centre’s waste recovery rate rose from 25.7 per cent in 2008 to 91.9 per cent last year and its organic waste collection program is responsible for diverting approximately 200 metric tons of waste from landfills every year. It has replaced disposable dishes, cups and utensils with washable and reusable equivalents in its food court over the past three years.

Ruel says Rockland Centre uses a clear and transparent communication system with tenants and staff members regarding environmental measures and the practices implemented in the building.

“We visit our tenants regularly to discuss concerns and new ideas. We also frequently suggest measures that tenants can apply in their work environment to promote energy conservation and reduce connection charges, conserve water, reduce and recycle waste storage, and properly dispose of toxic products.”

Every three years, a bilingual 20-page brochure is distributed to tenants to communicate environmental achievements, targets and plans for the next five years.