For property owners heavily invested in the U.K. and specifically London, it is likely too late to get out following the Brexit vote and for those not players in the market, prices will start to look attractive, said Corrado Russo, global head of real estate securities with Timbercreek Asset Management in Toronto. 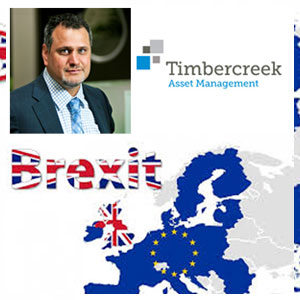 “If you have got illiquid assets today you are probably too late, I think your best bet is holding on, and frankly now it is time to turn the other way and say, `All right, at what point do I go and look for opportunities rather than look to get out as everybody else heads for the exits?’.”

Timbercreek, with $5 billion in assets under management, has a minimal exposure to the U.K.  Not because Russo, who manages an $800-million real estate portfolio saw Brexit coming, but because market conditions were worrisome well in advance of the vote by U.K. voters to leave the European Union.

“We actually have very limited exposure to the U.K.,” he said. “We have been pulling capital out over the last 12 months and not really putting any capital in.”

Russo estimates the firm has about 1% of its assets under management in the U.K. currently. It has larger equity positions in real estate trusts with exposure to the German office and residential real estate market, French office, and Netherlands retail real estate. In the U.K. the company has a small investment in a student housing REIT that could stand to benefit from a falling British currency.

It was industry analytics, not political analysis, that led Timbercreek to draw down its U.K. exposure. “I’m not going to sit here and tell you, `Yah, I knew it was going to happen.’ It had more to do with the fact that we were getting very uncomfortable with the amount of new supply that was coming on the market in London.”

A change in market conditions for U.K. real estate, particular office space, were not reflected in unit prices for U.K. REITs, which were trading at premiums to net asset value. “So you were paying up in the face of a fundamental outlook that saw some pretty significant supply.”

The impact of new supply now under construction is going to take some time to work out, particularly in the wake of the Brexit decision. “Demand is going to suffer especially in the office space. How do you absorb all that new supply?”

Russo expects London office rents to fall in the new environment. “It is going to be a tenant’s market, not a landlord’s market. So there is going to be some aggressive negotiations, there is new supply coming on line so tenants have options on where to go.”

When to jump in?

Noting that the industry is still coping with the news and major players such as Canada Life have moved to suspend redemptions of their U.K. property funds to avoid being forced to make fire sale deals, Russo is preaching patience.

“I think you need to see some cap rate expansion here, some declines in rents, some creep up in vacancy. Then when it really starts to look ugly, that is probably when you want to look at stepping in.”

That means Timbercreek continues to have U.K. investment on pause while it waits for opportunities.

“I think it gets worse before it gets better. There will be a buying opportunity but not yet. We are more focusing on what are the surrounding markets that are going to benefit from this in the immediate term and how do we take advantage of that.”

One of the world’s great financial capitals and until Brexit seen as a safe haven for international buyers, London will not disappear following the vote, added the Timbercreek exec.

“London is not going to go away. It was there before the E.U. and will be there after the E.U. But certainly some of the luster of using London or the U.K. as your financial hub for all of Europe is going to be called into question.”

That’s the exciting consequence for Russo. “If you are not going to be in London where do you go? Is that Frankfurt, is it Paris, is it Luxembourg is it Dublin?

“Dublin can be quite interesting. You have a market that is very close to the U.K., English is the first language, you have got a legal system that is built on the British system and you have had massive restructuring that has happened there since the financial crisis that is making it a much more competitive market globally and the cost of labour is cheaper. And you have got a pretty talented labour pool there as well.”

Rob Sutherland, an analysis with Echelon Wealth Partners in Toronto, stated in a note this week that Canadian REIT exposure to the U.K. is limited. “In the Canadian REIT universe only Brookfield Property Partners has significant exposure to London office through its direct holdings and interest in Canary Wharf Group.”

Others might benefit, he added: Dream Global REIT has broad exposure to German market and Inovalis REIT “has predominantly Paris exposure and along with some secondary German markets.” Both France and Germany could be net beneficiaries of a Brexit.