Construction has begun on the new headquarters for CBC/Radio-Canada in Montreal as part of a mixed-use project that will eventually transform a large segment of the eastern edge of the city’s downtown. 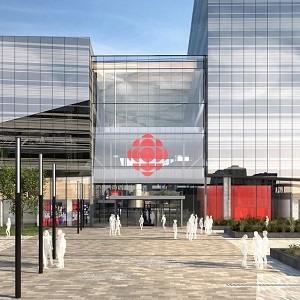 The new CBC/Radio-Canada building in Montreal will be part of a major development at the eastern edge of the city’s downtown. (Rendering courtesy Broccolini Real Estate Group)

The new Maison de Radio-Canada “helps kick off of the redevelopment of the eastern part of downtown Montreal,” says Roger Plamondon, president of Broccolini Real Estate Group, which will build and own the CBC/Radio-Canada Montreal headquarters.

Located next to CBC/Radio-Canada’s current Montreal site, the new headquarters will have 418,000 square feet of leasable space in four- and seven-storey buildings. There will also be a four-storey atrium and public square and the buildings will have silver LEED certification.

Features of the buildings include a number of studios and sets, daycare centre with outdoor play area, a 200-seat cafe, 200 bicycle parking spaces, showers and locker rooms for employees and 250 parking spaces – far fewer than the current headquarters.

Speaking at a groundbreaking ceremony for the new Maison de Radio-Canada, Plamondon said the buildings at the corner of René-Lévesque Blvd. and Papineau St. will cost about $100 million. They will be completed in late 2019 and employees will move from the existing building next door in January 2020.

“We’re answering all of Radio-Canada’s demands and with a tight construction schedule,” he said in an interview.

The new Maison de Radio-Canada “will be out of the ordinary” and bright and open, unlike the current site “which is closed to the population.”

The new CBC/Radio-Canada headquarters just west of the Jacques Cartier Bridge is being built “at no additional cost to the government or taxpayers,” says CBC/Radio-Canada’s president and CEO Hubert Lacroix.

CBC/Radio-Canada transferred the eastern part of its property – which was previously used as a parking lot – to Broccolini for $1 to allow construction of its new headquarters. Under the agreement, CBC/Radio-Canada will lease its new facility for the next 30 years at a stable annual cost equivalent to its current maintenance costs, which amount to $21 million per year.

Broccolini, a 70-year-old family firm, has developed and built more than four million square feet of office space in the past 10 years. It’s also the developer and builder behind the 50-storey L’Avenue project in downtown Montreal, which has become the city’s tallest mixed-use residential/commercial building.

CBC/Radio-Canada’s current Maison de Radio-Canada is a 23-storey tower completed in 1973. Its current headquarters and surrounding land are valued at $104 million by the City of Montreal.

Lacroix says a smaller CBC/Radio-Canada headquarters has been in the works for 10 years. Government cutbacks, changing technologies and a shift to digital content have reduced its workforce.

The public broadcaster has also sold its current building and the western part of its lot to Groupe Mach for $42 million. The sale allows Radio-Canada to offload an accumulated maintenance deficit of $170 million.

Groupe Mach is one of the largest office building owners in Montreal and Quebec City with a portfolio of 17 million square feet. Its Montreal properties include the Sun Life Building, the CIBC Tower and the Montreal Stock Exchange Tower.

Work on the existing tower and western part of the site will begin only after CBC moves into its new building.

According to Groupe Mach, the CBC site redevelopment project will total just over three million square feet. The mixed-use project will include offices, commercial spaces, green spaces and a residential portion that includes social and affordable housing. The current CBC tower will be converted into modern office space.

Housing construction on what is now a parking lot will help address a wrong of 1960s urban planning: Close to 5,000 people were expropriated from their homes in 1963 to make way for the current Maison de Radio-Canada. The houses were then demolished.

The new development “will serve as a magnificent eastern gateway to downtown Montreal. The new Maison de Radio-Canada will quickly become an instantly recognizable landmark through its architecture as well as its authentic character,” says Montreal mayor Denis Coderre.

He notes there are 150 construction cranes in the city and numerous projects underway worth $25 billion.

Butterflies, which were first used to mark the introduction of colour programming at CBC/Radio-Canada, were released by guests attending the groundbreaking ceremony.