Broccolini plans to build the tallest residential tower in Montreal on land it recently acquired near the Tour de la Bourse, in a move that would replace its own L/Avenue development as the city’s highest residential skyscraper. 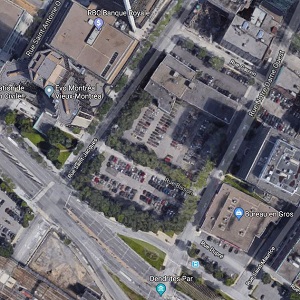 Montreal-based Broccolini plans to build the city’s tallest residential tower on part of this 135,000 square foot downtown property. The rest of the site will house a new National Bank headquarters. (Google Maps image)

The mixed-use building, at 700 Saint-Jacques St. would be 56 storeys. It would include 400 condominium units and 300,000 square feet of office and commercial space at its eight-storey base, says Roger Plamondon, president of real estate development and acquisitions at Broccolini.

Designs for the building, which is slated for completion in 2023, are still “very, very preliminary,” he says.

Broccolini’s 50-storey L/Avenue condo, office and retail tower near the Bell Centre is currently the city’s tallest mixed-use residential tower. Plamondon was speaking at the Montreal Real Estate Forum on March 28 during a session on significant projects in the city.

During the session, First Capital Realty (FCR-T) also announced a $250-million investment to replace its Wilderton Shopping Centre in the midtown Côte des Neiges area. It will construct a residential and commercial development of about 600,000 square feet to be built over the next five years.

The new Broccolini building in the Quartier International neighbourhood will rise next to the new headquarters of the National Bank, which Broccolini has also been granted a contract to build.

A few days later, Broccolini sold a large parcel of the land to National Bank, for an undisclosed price. National Bank then announced plans to build a new $500-million headquarters, which would be one of the largest skyscrapers to be built in the city in the last 25 years.

An architectural competition is now underway to design the National Bank’s new million-square-foot headquarters at 800 Saint-Jacques St. for completion in 2022. National Bank will be the sole tenant of the building.

A park will be built between the new Broccolini and National Bank buildings and both will be connected to the city’s underground network.

Given the rare green spaces between the two buildings, “we’re going to create a unique work environment,” Plamondon says.

Broccolini also began construction in January of its new 35-storey luxury condominium at 628 Saint-Jacques which will be next to the two other buildings. The 258 condo units in the art deco-inspired building off Victoria Square are 85 per cent sold.

The new Wilderton project will replace a shopping centre that was built in 1959 as a strip mall by the former Steinberg grocery chain and became an interior mall in 1970.

First Capital acquired the Van Horne Blvd. shopping centre in 2002 “and we knew from the beginning that it would require significant investments,” says Luc Fortin, vice-president, development at First Capital.

However, “the site is exceptional” as it’s located near downtown in a densely populated residential neighbourhood with several hospitals, research centres, the Université de Montréal and Métro stations nearby.

Construction of the first and smallest building – 21,000 square feet over two storeys – will begin in April in what is now the parking lot of the shopping centre.

Seniors housing also in the works

An agreement has been inked with retirement housing developer Le Groupe Maurice to develop seniors housing in the building.

The third building, to be built in 2020, will include commercial space at its base and 200,000 square feet of residential space.

He adds that of the 40 properties First Capital has in the Montreal region, 15 will be redeveloped in similar fashion to the Wilderton project.