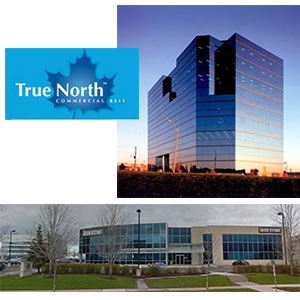 The Toronto-based REIT continued a very active late summer and autumn by ending November with the closing on a 30-year-old office building in North York, Ont. for $34 million.

“It’s a great property with long-term leases in a core urban market, so we like it,” said True North president and chief executive officer Daniel Drimmer of the nine-storey, class-A building at 3650 Victoria Park Ave. managed by GWL Realty Advisors. (Office in the image.)

The property is on 4.36 acres of land south of Steeles Avenue East that’s close to Highways 401, 407 and 404 as well as public transit. It has 154,300 rentable square feet and 551 underground and surface parking stalls. The blue curtain-walled building underwent extensive renovations in 2012 and has a BOMA BEST Silver certification.

The building is 88.2-per cent occupied, of which 84 per cent is held by TD Insurance. The other tenants are a senior living healthcare company, a law firm, an insurance broker and a financial adviser. There are an average of 6.6 years remaining on the building’s leases and most of the unleased space is on the ground floor.

“We have some vacancies that came with the building, but hopefully we’ll lease that up quickly,” said Drimmer.

Other True North acquisitions and renewals

Earlier in the month, True North acquired an industrial property for $8.4 million at 1035 Industrial Rd. in Ayr, outside of Waterloo, which has direct exposure to Highway 401. It’s on 8.01 acres of land and has approximately 156,300 rentable square feet. The building is completely occupied by a single tenant with a strong private covenant and almost 10 years remaining on its lease.

True North also renewed leases with two federal government departments for 272,206 square feet of space at a fully occupied office building at 340 Laurier Ave. W. in Ottawa. The terms extend the respective leases to February 2020 and February 2021, with both having two one-year options to extend.

“We still have some capacity with our November offering that we’re looking to deploy in short order,” said Drimmer. “We’re getting closer on some stuff.”

True North closed this week on the $24.5-million purchase of a 77,600-square-foot office property at 4500 and 4520 16th Ave. NW in Calgary. It has convenient access to the Trans-Canada Highway and is completely occupied, with 91.1 per cent of the space taken by a provincial government agency. It has an average remaining lease term of 7.7 years.

True North acquired a two-storey, 40,000-square foot office property at 5900 Explorer Dr. in Mississauga, Ont. for $10.5 million in August.  The 2.05-acre site not far from Pearson International Airport includes 140 surface parking stalls and is easily accessible by Highways 401, 427, 409 and 403. The building was constructed in 2000 and is fully occupied by The Beer Store’s corporate offices. (Low profile office building in image.)

True North owns and operates 30 commercial properties consisting of approximately 1.94 million square feet in primary and secondary markets across Canada. All of them are long-term holds and none require any major renovations, according to Drimmer, who added that the REIT is interested in more Toronto acquisitions.

“The REIT is continuing its push from secondary markets into more urban markets while maintaining its tenant profile of predominantly government and credit-rated tenants on long-term leases.

“Quarter over quarter, there are never any surprises. The stability and visibility of the cash flow is locked in for many years and backed by very good real estate. It is a great REIT for people wanting yield and the reliability of a monthly, safe, tax-efficient distribution with built-in growth.”

True North was listed on the Toronto Stock Exchange in June 2013. It closed on Dec. 8 at $6.15 per share and has a market value of about $177.5 million. Drimmer said more people are starting to pay attention due to the REIT’s recent growth.

“We’ve done a lot of marketing, we’ve got some positive articles in the media, we’ve done some equity offerings and a private placement, and we’ve made some smart acquisitions. So with all of that combined, people are starting to notice us, which is great.”