From his office in Calgary, Kendal Harazny can watch a live time-lapse web feed of construction on his firm’s six-floor signature development on Whyte Avenue in Edmonton. 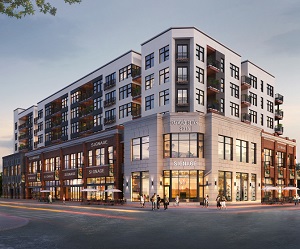 The Raymond Block, named after a hotel that stood on the site years ago in the historic Strathcona neighbourhood, has a special place in the heart of the Wexford Developments co-founder.

A decade ago, Harazny lived two blocks from the vacant lot where the Raymond Block is rising. The University of Alberta business student wrote a paper on how to develop the site for his entrepreneurship class. So when the property came available in 2014, the same year Harazny and his partner Sam Gordon founded Wexford Developments, the opportunity was too great to resist.

“When this came up for sale, I spoke to my investors. I was pounding my fist on the table for this one. You just can’t replace this type of real estate. It’s a very special location on a street that’s going to be drastically improved in the next 10 years,” says Harazny.

The 132,000-square-foot, $50-million multi-use project features ground-floor retail, already 80 per cent pre-leased, a second floor of office space, about 50 per cent leased, and 94 apartments on the four top floors.

In February, Wexford plans to hold a topping-out party where it will announce the retail tenants. The building will be complete by the end of August, says Harazny.

The prime location on the corner of 82nd Avenue (also known as Whyte Avenue) and 105th Street has had a difficult past. An Esso gas station closed there in 1998. The site remained empty for 20 years as environmental remediation was done by Imperial Oil to clean up leakage from underground tanks.

“Imperial Oil did a very good job of the remediation they were required to do. We as the developers were required to take on some further measures during development. We have some preventative measures in the event any sort of contamination was ever to re-enter the site,” says Harazny.

Because it started from scratch, the Raymond Block has the advantages of new construction in a trendy urban neighbourhood dominated by buildings under historic designation.

The developer’s architect, Dialog, designed the building with a nod to the existing architecture, breaking up the front visually so it appears to be four separate buildings. Harazny says the materials used will be quality brick and granite similar to what would have been used in the past.

The retail space has 18-foot ceilings. Eric Slatter, partner in Omada Commercial Real Estate, says five of the seven retail spaces are spoken for and the leases are going for $50 to $55 per square foot, “a high-water mark for Whyte Avenue.”

Slatter says the tenants are a mix of local and national retailers and not businesses moving from elsewhere in the city.

“They are either new or in some cases supplementary (to existing outlets),” he says.

“We want the best product, not only on Whyte Avenue but in the city. We are building all of our real estate to hold it for the long term. We need this to have longevity and be a popular rental property for the next 30 years,” says Harazny

“Our strategy as we move forward is to focus on urban inner city sites. Everything we do has to fall in line with an urban, often mixed-use site. We just believe in the urbanization of cities. We are not suburban developers.”

Wexford’s head office is in Calgary and there is an office in New York City, which is where Gordon is now based.

“Sam and I decided we would like to do this under our own company and take Wexford Capital on as a client.”

In 2014, the pair founded Wexford Developments. They kept the Wexford name, even though they are not part of the older firm. Wexford Capital does, however, remain their biggest investor, and they still retain a number of legacy properties from the Wexford Capital portfolio, says Harazny.

Holdings include the Arch, an apartment high rise in Calgary’s Beltline neighbourhood in partnership with Cidex; a building in the permitting stage in the Beltline in partnership with Oxford Developments; a business park in Sherwood Park, just east of Edmonton; and several properties in Tempe, Ariz., and Grande Prairie, Alta.

Harazny says the firm is looking at new development deals in Kelowna, B.C., and Arizona.

“We are currently in the process of purchasing a site in the arena district (of Edmonton) for a high-rise residential tower and we recently purchased a small retail building on Whyte Avenue.

“We would like to own as much real estate on that street as we can,” he says.

Harazny says in future projects he would like to again use the services of OxBlue, the company which provides the time-lapse camera now documenting the rise of the Raymond Block.

To watch construction on the Raymond Block, go to: https://app.oxblue.com/open/wexford/raymondblock