Off-campus, purpose-built student apartments have been much slower to catch on in Canada than the United States, and three Americans provided tips on June 21 at the North American New Apartment Construction and Mixed-Use 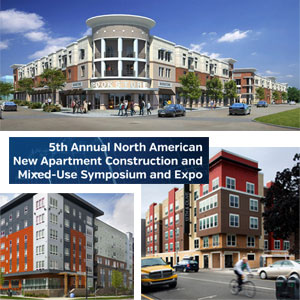 Symposium and Expo at the Metro Toronto Convention Centre.

“Ninety-five per cent of off-campus student product in the U.S. is walkable to campus, which is what lenders and buyers want,” said Greg Faulkner, president of Dallas, Texas-based Humphreys & Partners Architects, L.P., which works on projects involving about 15,000 student beds annually.

While suburban sites with shuttle bus services to university campuses used to be common, their growth has been stalled due to a lack of land and changing preferences which have driven the evolution of student housing over the past 10 years.

Jay Denton, senior vice-president of Dallas-based research and analytics company Axiometrics Inc., said student apartments in close proximity to campuses have higher occupancy rates and can charge rents of up to 50 per cent higher than those farther away. He added that student housing real estate investment trusts have a higher rent per bed and better rent growth than the national average. They also lease faster.

Faulkner showed slides of several examples of the different types of student housing that Humphreys has designed and talked about trends.

To help keep costs down, the firm tries to build its mid-rise projects with wood frames and avoid underground parking.

Student housing has generally shifted from low-rise to high-rise and 1,200-square-foot, four-bedroom and four-bathroom units are becoming a norm. The average size of apartment that Humphreys works on is 500 to 700 beds and costs from $40 to $60 million U.S., though mega-projects with more than 1,000 beds — and sometimes accompanied by hotel or retail elements — are slowly becoming more common.

Student apartments with fewer amenities and located in smaller cities usually rent for $600 to $700 a bed per month while top-end apartments can fetch monthly rents of $1,000 to $1,200.

Rents usually include Internet service and sub-metered heating and air conditioning, although some landlords are now using caps of $25 or $30 per head for utilities. Residents must pay the difference if their total exceeds that limit.

Tom George, vice-president of development for Philadelphia-based The Michaels Organization, said his company has about 8,000 student beds under management and ownership and delivers about $300 million in student housing each year.

George provided the example of Tempe, Az., which has a large student population and a competitive housing environment that’s spurring developers to come up with higher quality buildings that can charge premium rents — even if just five to 10 per cent of students (and their parents who usually pay for them) can afford or are willing to pay for them.

“Developers do a lot of work before they come to the market and they know what to put together,” said George. “Ultimately, it’s fine-tuning that rental rate for each unit type, and it’s related to the specific student that can afford it.”

George added that there’s a one-to-one parking spot to bed ratio in a lot of U.S. student housing and that parking ratio drives a lot of the design and takes up a lot of the costs of projects.

“Having a real local understanding from the development side is important. It’s very difficult to get these projects approved, developed and financed. It takes years. You just can’t pick out a property or a site, close on it and build on it.”

Due to the way school years work, it’s even more important for student housing to be completed on time than conventional apartments. Failure to deliver can create a negative perception for a company and people may lose confidence in it. Most student apartment leases are for 11.5 months to allow turnover periods for moving in and out as well as cleaning and repairing units.