Construction is underway on a Quebec project that has attracted interest from China and will be the tallest seniors housing tower in Canada. 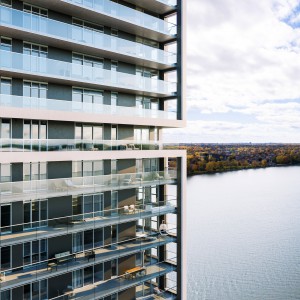 The Reseau Selection Panorama, at 30 storeys, will be the tallest seniors housing tower in Canada when it is completed.

The 30-storey Sélection Panorama is being built at a cost of $94 million by Réseau Selection in the Sainte-Dorothée neighbourhood of Laval. It is slated for completion in October 2018.

The building, which will also be the tallest in Laval, is located on parkland on the banks of the Rivière des Prairies. It will afford views of the riverfront, downtown Montreal and Mount Royal.

The idea was to have a seniors housing concept with vertical density “that we can export outside Quebec to high-density zones in big cities,” such as Shanghai and Beijing, China, where land is very expensive, says Herbert Nunes, senior director, real estate development at Réseau Selection.

The company has been “in very advanced discussion with a lot of people in China” for a year and its vice-president recently returned from a trip there. “Our discussions with the Chinese are going very, very, well,” says Nunes. “We believe that something will be started (there) in 2018.”

Founded 25 years ago, Réseau Selection has 35 residences in operation or under construction and nearly 10,000 residents.

“(The Chinese) are very interested about our knowledge of the senior housing product,” he says. “They believe that we can bring a lot of knowledge to the big developments they have to do.”

China is confronting the problem of a growing senior population. The country has about 128 million people over 60 and that number could reach 400 million by 2050.

Quebec’s model of affordable and autonomous seniors housing is gaining attention, Nunes says. “We cannot be shy to say Quebec is one of the best places to understand senior housing. There are a lot of good players here.”

According to a December 2016 report by Altus Group, 6,882 new seniors housing units will be added to the Quebec market during 2017.

Nunes says Réseau Selection will launch its first Canadian project outside of Quebec this year. It sees opportunities in Ontario and Western Canada.

Sélection Panorama will feature minimalist architecture and will have a two-storey lobby. “We believe that we are building (a) hotel – a kind of high-end, mixed-used common space,” Nunes says. “It’s going to be a destination. It’s going to be an iconic building. People will want to be living there.”

Nunes says the zoning was in place to build the 30-storey building and that its location and views will be very important. “I believe it’s something that people are searching for – that kind of density.”

The new casino project will include an à la carte meal plan. Meals are not included for “more high-end projects like this one,” he says, noting the project will likely attract many younger seniors who want full kitchens in their units.

“For us, it’s very important to have something (where) they can cook for themselves” and to offer the dining room as well. The dining room will have table service.

Activities will range from yoga to a walking club and a public riverfront bicycle path will cross in front of the building.

Réseau Selection wanted to add care units to the building because there are often couples in which one person is sick and has to go elsewhere to get care. “With our population getting older, we want to have the people in the same building in the same complex,” Nunes says.