Catalyst137, a light industrial and office building in downtown Kitchener, Ont., will be the world’s largest hardware technology hub when it opens this fall. 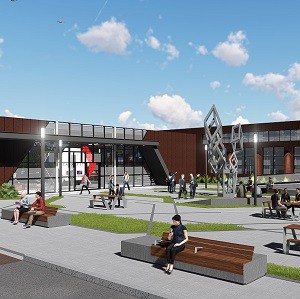 Once a tire storage warehouse, this Kitchener property is being redeveloped into Catalyst137, the world’s largest hardware tech hub. (Image courtesy Voisin Capital)

Kitchener-Waterloo is home to world-class technology incubator and accelerator programs and many entrepreneurs and startup companies are looking for space to create new products.

Caters to “Internet of Things” companies

Catalyst137 was created to support innovation in the community and make it easy for “Internet of Things” (IoT) companies to possess the resources they need to scale up. Hardware tech firms are currently limited to office space outside of downtown because they need space for manufacturing and shipping.

Catalyst137 will give hardware tech companies a centralized place for investment, consulting, manufacturing, engineering, government relations and other services.

The former Uniroyal-Goodrich tire warehouse at 137 Glasgow St. was built in 1957. It was acquired in June 2016 for $21 million and the redevelopment has been ongoing since last July. It will take $34 million in hard and soft construction costs to complete the project, according to Voisin, who added it’s on time and on budget.

“When you’re storing tires, you don’t need much in terms of systems like heating, cooling or water,” said Voisin. “What we need is a lot of power, a lot more washrooms, and water and sanitary services.”

The formerly uninsulated warehouse now has a completely new envelope after the exterior was reclad and a new roof was added. New electrical, water, sanitary and heating, ventilation and air conditioning services were installed and connected to the city’s system.

Voisin said the facility now has everything a new building does, but with a “cool industrial aesthetic on the inside.”

While Catalyst137 isn’t targeting a LEED certification at this juncture, Voisin said it might be considered in the future. The property has an on-site storm water management system and an application has been made to install solar panels on the roof.

There’s ample room for bicycle parking and Voisin said Catalyst137 has put “a lot of money” into improving and adding entrances to the adjoining Iron Horse Trail so tenants can use it to walk, jog or bike to work.

Catalyst137 is offering businesses options to join a community of startup peers and will lease spaces ranging from 3,000 to 50,000 square feet. Companies will have access to loading bays and a shared manufacturing space featuring 3D printers, laser cutters, metalworking equipment and more.

“We wanted the building to be a blank canvas so that a tenant can customize it to their own desires,” said Voisin.

The base rent is $14 per square foot for shell space. Charges for customizations will be negotiated and added on top of that based on a tenant’s length of lease, credit covenants and other factors.

“One of the ways that we’re differentiating ourselves among other landlords in Kitchener-Waterloo is our willingness and ability to work with earlier stage startups and extend credit to allow them to build things that might not otherwise have been possible because their balance sheet or income statement doesn’t look exactly the way some of the bigger landlords would be wanting,” said Voisin.

A still unnamed incoming tenant will provide opportunities on site for people at earlier stages of development who aren’t in a position to sign a long-term lease and initially don’t need much space.

Another innovation is the installation of hundreds of sensors to make the building and surrounding streetscape “hackable.” This will allow Catalyst137 tenants to experiment with, and add to, the building’s IoT network to help foster new ideas and support emerging technology.

Voisin said the system is the first of its kind in Canada, and possibly in North America, and will be valuable for research on driverless cars and related products.

The Catalyst137 site is 24 acres, half of which is occupied by the building. Voisin said the rest of the property is comprised of space for parking with “drive aisles that will behave very much like streets to allow people on-site to do real-world testing instead of computer simulations.”

Catalyst137 is already 70 per cent leased during the construction phase. Miovision, which specializes in traffic data collection and signal operations, is the anchor tenant.

Other companies that have signed on include electronic manufacturing services provider Sigmapoint Technologies, the Blakes law firm, “plug and play” designer and integrator PCC Group and the Business Development Bank of Canada.

“It’s a testament to how badly this type of facility was needed,” said Voisin. “We’re in talks with a few large tenants right now that could potentially take the rest of the building.

“It’s an exciting time and we’re trying to strike the right balance between the big brand name guys and the startups. We need to have a certain amount of startups so that it really becomes a startup ecosystem rather than a large, multi-use industrial facility.”

Graffiti, the group behind Kitchener’s The Berlin restaurant, will open a restaurant, bakery, coffee roaster, microbrewery and food market in Catalyst137.

“They’re a small and very nimble team,” said Voisin, who credits Osmington for helping Catalyst137 stay true to its initial vision and aiming to get the right tenant mix.

There’s a plan to add 75,000 square feet to the building in a future expansion, and Voisin believes the Catalyst concept can be taken across Canada.

“You can imagine a Catalyst in Hamilton for medical technology or in Guelph for agri-tech or in Calgary for energy technology. We have pretty deep talent in various areas of the country, and so far I think a lot of the hubs for that talent have evolved on their own very slowly.

“We think that if you start with the goal of creating an ecosystem, and you bring the right tenants into the right facilities, there’s an opportunity there to essentially catalyze that industry.”