Cadillac Fairview and the Investment Management Corporation of Ontario say they are now ready to proceed to construct a long-anticipated, 46-storey office tower at 160 Front Street West in downtown Toronto. 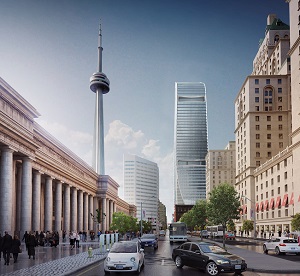 The development, on the northeast corner of Front and Simcoe Streets, will feature 1.2 million square feet of office space, 339 parking stalls, 12,290 square feet of retail space and is slated to open in the fall of 2022. The cost is projected to be $800 million.

“This city continues to experience record-low vacancy rates, fueled by demand for quality, sustainable office space across a broad array of clients, and in particular the tech and financial sectors,” said John Sullivan, president and CEO of Cadillac Fairview, in a release Wednesday. “With space availability in downtown Toronto at the lowest level in over 25 years, we see tremendous opportunity for this development.”

The inaugural tenant will be CF’s owner, Ontario Teachers’ Pension Plan, which will relocate its head office from North York to 160 Front Street.

“Toronto is a vibrant and international city, and the downtown core is a major hub of finance,” Teachers’ president and CEO Ron Mock said in the release. “We believe this is the right time to plan our move closer to our partners and the pool of talent we will need to see us into the future.

“This new building will have many attractive elements to help foster teamwork and innovation, in a healthy and sustainable environment that is close to many different transit options.

“We are very pleased to be moving into a building run by Cadillac Fairview, our real estate subsidiary and a global developer of leading-edge office space.”

The development has been in the works for several years, with an original design for a 54-storey office complex submitted back in 2014. That design has been refined in the interim, though the overall exterior look of the building is quite similar to renderings from 2014.

CF says this latest development reflects the demand for high-quality, amenity-rich office environments across the country.

“Our current momentum in commercial development speaks to a trend where best-in-class employers are seeking prime urban locations, and we take great pride in our ability to ultimately work with our clients to meet those needs,” said Sullivan.

Cadillac Fairview has $1.5 billion of major office projects under development, including:

– the $479-million building at 16 York Street in Toronto;
– the $200-million BMO Campus at CF Toronto Eaton Centre;
– the $60-million revitalization of 2 Queen Street West; and
– the $25-million redevelopment of a former Sears location at CF Champlain in Moncton for TD Bank Group.

Designed by world-renowned Adrian Smith + Gordon Gill Architecture, in collaboration with B+H Architects, the building will offer a “distinctive silhouette on the downtown skyline while meeting prospective clients’ desire for efficient design and environmental sustainability in both construction and operation” says CF in the release.

Located a block from Union Station and with easy access to the Gardiner Expressway, the site is also close to amenities including a diverse range of retail, food, restaurant and hotel choices.

CF’s partnership with IMCO represents a continued collaboration on a number of projects on behalf of the Ontario Pension Board (OPB). These include an office tower under construction at 16 York Street in Toronto, as well as ownership of existing office properties in Toronto and Vancouver, including RBC Centre and Toronto-Dominion Centre.

“Investing in real estate is an integral part of our investment strategy because it is well-aligned to Ontario Pension Board’s return objectives,” said Brian Whibbs, IMCO’s managing director of real estate, in the release. “. . . We are proud to be a part of this exciting project, as we continue to focus on delivering value to OPB through the acquisition and development of high-quality assets that generate strong results over the long term.”

Cadillac Fairview is one of the largest owners, operators and developers of office, retail and mixed-use properties in North America. The company also invests in retail, mixed-use and industrial real estate in Brazil, Colombia and Mexico.

Cadillac Fairview has been wholly owned by the Ontario Teachers’ Pension Plan since 2000.

It holds a diverse global portfolio of assets, approximately 80 per cent of which is managed in-house, and has earned an average annualized rate of return of 9.9 per cent since the plan’s founding in 1990. Ontario Teachers’ is an independent organization headquartered in Toronto.

IMCO is one of Canada’s largest investment management firms with $60 billion of assets under management. Designed to serve public sector clients in Ontario, IMCO’s primary objective is to achieve long-term results that enable its institutional partners to meet their financial obligations to members and beneficiaries.

IMCO’s clients include the Ontario Pension Board (OPB) and the Workplace Safety and Insurance Board (WSIB).

Created in 2016, IMCO was established as an independent organization, operating at arm’s length from government and its institutional members, and guided by a highly experienced and professional Board of Directors.