Cadillac Fairview has completed major renovations to a large number of its shopping centres over the past four years, and can now add Toronto’s CF Shops at Don Mills to that list. 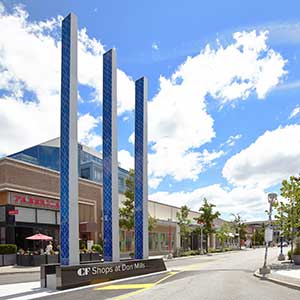 “While ‘experience’ has become the new theme at a lot of retail, CF Shops at Don Mills is an open-air mall and had to be approached differently,” said Cadillac Fairview senior vice-president of development Niall Collins. “It was very important for us that it was an immersive and memorable experience for all our clients in four seasons.”

Cadillac Fairview spent $21 million on the revitalization of the 40-acre site, which also includes residential and office components. Work began on the project, which will further integrate the various elements of the mixed-use community, in the spring of 2016.

CF Shops at Don Mills invited community feedback to make some of its improvements, which include expanded entertainment experience zones at the junction of Leadly Lane and Karl Fraser Road, as well as O’Neil Road, with patio zones and overhead lighting to animate these new public spaces. A property-wide music speaker system has been added.

Upgraded seasonal landscaping, furniture and seating options, as well as new art installations and an improved water fountain in the Town Square, have further revitalized the look of the property, which received a complete overhaul in 2008 after the demolition of the Don Mills Centre.

The expanded outdoor spaces will host a variety of programming elements, including cycling and yoga classes, a weekly farmers’ market, an art show with more than 70 participants, and train rides for children this summer.

Entrances off Lawrence Avenue and Don Mills Road have been better defined through the insertion of large pylons that light up at night and are reflective during the day to catch people’s attention.

The free, four-level parkade was updated with digital signage displaying real-time parking counts for its 1,000 stalls. A new pedestrian connection off Karl Fraser Road was installed for better access to and from the retail area. Way-finding systems and signage were improved, while pedestrians will benefit from widened sidewalks.

“The entertainment and restaurant zones have been a very strong part of the identity of CF Shops at Don Mills, and we’re going to increase that and elevate the percentage of restaurants and entertainment that we had previously,” said Collins.

“The office component includes dentists, wealth management, opticians and all of the things that a community needs,” said Collins.

The first three condominiums on the site — Liv Lofts, Reflections at Don Mills and Flaire — sold out quickly. Liv Lofts was a conversion while the other two were new construction projects, all done in conjunction between Cadillac Fairview and FRAM Building Group.

Rodeo Drive, a 32-storey condo tower joint venture between Cadillac Fairview and Lanterra Developments, exceeded its pre-sale trigger threshold to begin construction and will break ground later this year. There will be seven condos, with additional retail and restaurants at the base, when residential construction is complete.

“When the 40-acre site is built out, you’ll have in excess of 3,000 people living there in addition to the customers and clients that use it as a destination for various reasons,” said Collins. “It really is a community in terms of what it’s trying to achieve overall.”

CF Shops at Don Mills is also being used as a testing ground for a future mixed-use project Cadillac Fairview and Armadale Co. Limited plan to build on a 170-acre parcel of land now occupied by Buttonville Toronto Airport.

“It’s an important project to help us understand how to integrate, both vertically and horizontally, many different uses,” said Collins.

Negotiations with the Ontario Municipal Board regarding the site have been ongoing, as Collins said such a large project is complicated and involves multiple buildings, road networks, site servicing and different stakeholders.

The Cadillac Fairview portfolio is owned by the Ontario Teachers’ Pension Plan, a diversified global investor which administers the pensions of more than 300,000 active and retired school teachers.

The Canadian portfolio includes more than 38 million square feet of leasable space at 67 properties that are valued at more than $28 billion.