Canada’s bull run in commercial real estate shows no signs of abating despite ongoing threats to NAFTA and concerns over Canada’s overheated housing market, said CBRE’s executive vice-president at an annual market and economic update in Vancouver this week. 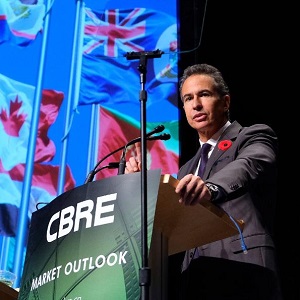 Paul Morassutti said commercial property investment and leasing in Canada “continues to defy predictions while grappling with an unprecedented level of change.”

He was speaking Wednesday at the introduction of the Vancouver Real Estate Strategy and Leasing Conference to a packed ballroom of industry stakeholders and observers.

“We are currently eight years into an incredible bull run for the commercial real estate market,” Morassutti said.

“After years of mediocrity, the Canadian economy outperformed all G7 nations in the first half of the year,” he said. “The Alberta economy rebounded sharply while growth in B.C., Ontario, Quebec and most other provinces remain solid.”

He said the foremost question on the mind of everyone in the room is whether the commercial property market has peaked.

“After a record year for (commercial property) investment sales in 2016, it looks like Canada will set a new record in 2017,” he said. “This bull run shows no signs of fatigue.”

Morassutti acknowledged Canada’s economic fundamentals have slowed in the latter part of this year and a potentially collapsed NAFTA would pose a threat of real disruption.

Morassutti downplayed Canada’s big-city housing affordability crisis. He said there exists a “consensus” the combination of more restrictive mortgage lending, taxes on foreign purchases in Vancouver and Toronto and the expectation of higher interest rates would likely lead to a slowdown in the Canadian housing market in coming years, but not a crash.

He strummed several optimistic, and clearly hopeful, chords in his speech.

“Bull markets do not die of old age,” he said. “For the cycle to end, there needs to be a catalyst; either a major policy mistake, or a significant economic disruption in one of the world’s major economies. In our (CBRE’s) view, neither appears to be in the offing.”

Retail in slow bleed, but evolving

He characterized the Canadian retail landscape as a slow bleed — but one with increasing separation between static, outdated losers and innovative winners.

In the office industry, technology and artificial intelligence is set to create a shakeup, he said.

“If machines can review mountains of legal documents in seconds rather than days, what does that mean for law clerks and paralegals? And by extension, what does it mean when a law firm’s lease rolls over? Are all of these firms going to shrink?”

Landlords need to prepare themselves for days when-white collar jobs (and traditional office-fillers) like financial advisers and accountants are replaced by the makers of algorithms and block-chain systems in what will clearly be a painful transition, he said.

Meanwhile, the industrial sector continues to face historically low vacancy rates and a massive shortage of product, he said. “In Vancouver and Toronto, we are literally running out of land.”

Multi-family investment and sales continues to represent the lowest volatility of any asset class, especially so in B.C., Morassutti said. “This sector remains rock solid.”