Downtown West is one of Toronto’s hottest markets, a fact that has Crown Realty Partners celebrating the purchase this week of 111 Peter Street. 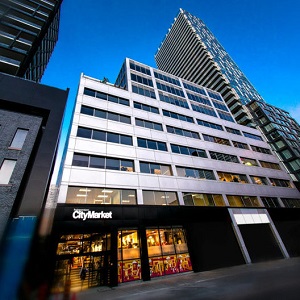 The real estate investment and management firm purchased the 252,000-square-foot building along with partners from a pension fund owner, according to Emily Hanna, a Crown Realty partner.

“Downtown core is hard to buy,” Hanna said. “We have had a lot of leasing success with other properties that we own and manage within urban areas and when this opportunity came up it was pretty compelling.”

Crown holds a 50 per cent stake in 111 Peter with the remainer held by three institutional partners.

The price was not disclosed, but Hanna described the price- tag as “in excess of $100 million.”

Crown and its investment partners were attracted to the flexibility of 111 Peter Street.

The building, constructed in 1972, boasts an extremely large floorplate of 29,000 square feet, owing to its origins as a manufacturing and warehouse facility in what was once Toronto’s thriving garment district.

Situated amidst the growing technology, advertising, media and information hub in downtown west doesn’t hurt, either.

“The floorplate in really unique in this office node that typically caters to smaller tenancies that are obviously growing and you want to be able to accommodate those tenants,” Hanna said. “You typically can’t do that in this node.”

The nine-storey building features underground parking and was extensively renovated in the past. Those efforts included the construction of three additional floors of office space.

Search is on for retail tenant

One immediate task that lies ahead for Crown and its leasing partner is to find a tenant for the currently vacant 10,000-square-foot ground floor retail space in the building.

The other ground-level space is currently occupied by grocery retailer Independent City Market.

Given the explosion of condo construction in the immediate area, Hanna expects the incoming retail tenant will serve those choice-starved downtown dwellers.

“Because of all of the adjacent residential condos that are here, we would really like to see something that could open up the building more to the community,” said the Crown Realty partner.

The Peter St. acquisition marks the end of the Crown Realty III Limited Partnership. (The company has one other acquisition in the final stages of completion to complete the fund).

Fund no. 3 (CR III LP) is made up of more than 1.4 million square feet of GTA real estate within Markham, Mississauga and North York.

With the third fund all but filled, the company also announced the successful initial closing of its fourth value-add fund, Crown Realty IV Limited Partnership with $120 million of committed capital to date.

The fund is expected to close later this year with capital in excess of $200 million and will similarly focus on office properties in the Greater Toronto Area that fit with its value-add investment mandate.