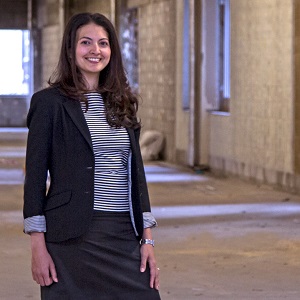 Hanna is the only female partner at Crown and just the second woman to serve as president of the Greater Toronto chapter of the Commercial Real Estate Development Association (NAIOP).

“I’ve been fortunate to work with supportive and encouraging mentors and colleagues, male and female, both now and early on in my career. For the most part, I’ve encountered environments that are meritocratic, regardless of gender.

“Of course, as a relatively new mom, there is always the challenge of figuring out how to balance the demands of family and work, but having it all is a challenge that transcends industries.”

Allied is focused on repositioning urban buildings into modern office environments. Hanna’s role was to identify and acquire properties across Canada fitting that mandate, as well as to seek out intensification opportunities.

One of the most exciting acquisitions Hanna took part in with Allied (AP.UN-T) was a data centre at 151 Front St. in Toronto, which required more than the typical due diligence since it had so many technical aspects to consider in addition to more common office building components.

“The acquisitions we make at Crown do share common ground with the approach Allied initially took, in that we actively seek buildings where we believe there is a value proposition offered to tenants,” said Hanna.

“Crown takes its role as a fiduciary very seriously and is known for our deep analysis of investment opportunities. Crown has been known for its value-add real estate funds.

“Since joining, in addition to growing our value-add funds, we have also introduced a fund comprised of core holdings. In both cases, the approach we take is always one of active management.

“That kind of philosophy and hands-on mentality extends into the core assets we manage, where we continue to look to add value. A case in point is the construction of a retail/restaurant amenity for the building on the podium of 400 University, an otherwise fully stabilized asset.”

Crown has also been involved in a number of sale leaseback deals, which involve working with companies divesting themselves of buildings they own and then becoming tenants. Hanna’s first such experience at Crown was with AstraZeneca Canada’s corporate headquarters at 1004 Middlegate Rd. in Mississauga, Ont.

“It gave me an opportunity to work with our operations team through the transaction and finesse the deal, as well as making everyone happy in the end to make sure they felt like they were getting what they needed,” said Hanna.

“They’re very different transactions, but very interesting with a lot of moving parts.”

A steadily rising Greater Toronto Area commercial real estate market has resulted in a lot of capital chasing fewer and fewer opportunities. Investors are starting to look to the suburbs given the lack of options in the core.

“A good deal of my time has been spent in these suburban markets and I believe that’s where our focus will continue to be in the coming months,” said Hanna.

“That said, in a rising market, the depth of the team, quality of the analysis and overall investment thesis become all the more important to ensure that returns come with the appropriate margin of safety.”

The Greater Toronto chapter has a growing membership of approximately 1,200 across 200 organizations. It’s making major inroads with its “developing leaders” group of under-35-year-olds.

It also introduced a past presidents’ advisory council whose membership will ensure it taps into the organizational memory at NAIOP to best position it for the future.

Hanna is adamant that NAIOP membership has enriched her career development and growth over the years. It’s given her the chance to find mentors, access forums for sharing best practices and investment approaches, and take advantage of educational opportunities to broaden her knowledge across other areas of focus within the industry.

“The greatest value the current board can offer this year is to ensure that we’re building the right infrastructure to engage and stimulate the members that we have — knowing that happy members will strengthen our growth,” said Hanna.