A decent year for REITs shaping up for 2017: Timbercreek

Given the uncertainty of a Donald Trump-led U.S., continuing economic and political uncertainty in Europe and a U.S. Federal Reserve that seems hell bent on pushing up interest rates in 2017, this looks like a down year for international REITs, right? 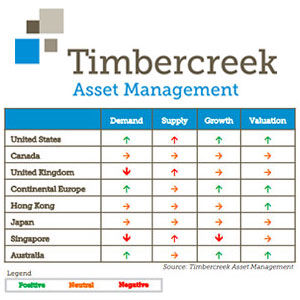 Not so, according to Corrado Russo, Timbercreek Asset Management’s senior managing director, investments and global head of securities.

His firm released a 2017 outlook paper that calls for global REITs to deliver an 8.5%–10.5% total return in 2017. That is made up of a 4% current dividend yield and 5%–6% growth in earnings driven by occupancy gains, higher revenue from bringing in-place rents on expiring leases to market, acquisition of new properties and the completion of existing development projects.

Given all that is going on in the world, how can REITs succeed despite perceived headwinds? Simply put, investors’ desire for yield above all else.

“A lot of it is just how the real estate sector and specifically REITs, is shaping up from an alternative investment perspective,” he said.

It’s an investor beauty contest in which REITs are sitting, and looking, pretty. “It is very difficult to buy fixed income because of concern about rising rates and the yields are low. On the equity side, growth concerns went away with Trump, but now it is sort of overdone in terms of how much it has been priced in and now you are really paying up if you are jumping in on equities.

“So REITs are giving you a bit of both worlds, you are getting the yield and total income streams and the return with low-single digit to mid-single digit growth to earnings, it is a pretty attractive offer.”

Timing is also everything. A 8.8% decline (in US dollars and a 6.3% in Canadian dollars) in global REIT share prices since August 1, 2016 “has created an attractive buying opportunity for investors.”

A quick synopsis: “Demand growth is being led by the U.S. and Australia, supply is expected to remain favourable on the Continent, and valuations are most attractive in Hong Kong, Europe, Australia and the U.S.”

Timbercreek sees a “bifurcated market” – a fancy way of saying Alberta real estate and everyone else.

Toronto office, at one end of the spectrum, is well positioned despite a tower building boom. All those shiny new buildings have “not adversely impacted rents.” Timbercreek’s 2017 forecast for Toronto office: “rising cash flows from higher occupancies and higher rents upon expiration as leases roll up to market.”

Look to Calgary for the opposite story. A drop in demand for space caused by a shrinking oil patch has combined with a bevy of new office space to hit the market over the past two years “has caused rents to decline considerably.” Calgary office is still a market in search of a bottom in 2017.

Retail is also expected to fare well in this new year.

Timbercreek’s forecast for the U.S. real estate market is based up the President-elect’s campaign promises of lower corporate and personal taxes, higher infrastructure, defense spending and financial regulation which could add up to “a significant increase in fiscal stimulus.”

Industrial real estate should benefit from increased spending, driven by e-commerce tenants, as online sales continue to gain a higher market share of total spending. (Global online sales are projected to double (to $US4 trillion) by 2020, and online retailers require three times the logistic real estate needs compared to a bricks-and-mortar retailer. Industrial vacancy in 2017 is expected to reach a cyclical low of 8.6% and market rent growth is poised to increase about 4.5%, citing Deutsche Asset Management data.

Infrastructure and defense spending, combined with less financial regulation, should be positive for the office sector, particularly in Washington and New York’s office markets.

Part two of this story will be published in the January 19, 2017 edition of Property Biz Canada.