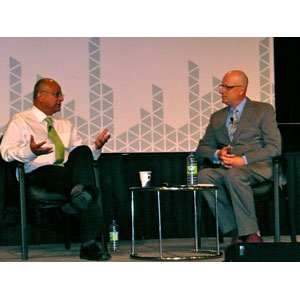 The SVN Rock Advisors, Inc. Brokerage chief executive officer was asked to tackle a wide range of topics during an hour-long discussion at the Metro Toronto Convention Centre. Here’s a summary of what Lobo had to say:

Lobo said apartment buildings should preferably be built on “A-minus or B-grade” land, and that land typically makes up 10 to 15 per cent of the total cost. He emphasized the importance of setting rental prices correctly from the start to maximize revenues. Location, unit design and amenities drive rental rates, while good customer service and property management are also critical.

“There’s a niche in the marketplace that got created because Ontario and other provinces had rent controls. Rent controls really hurt the industry. It stops new apartment construction. It stops innovation. To a large extent we’ve lifted rent controls in the province on new product, and older product is vacancy-controlled so it’s up to the market.

“But the culture here is still tied back to the culture that we grew up with. It’s about cutting costs and not necessarily about raising revenue. That merchant builder class that was here in the 1960s and ‘70s that built all the towers in the parks and the major complexes in Toronto and Ontario have mostly moved on. Their companies are now developing other assets, mainly condos and hotels. It’s time to bring them back.”

The recent surge in new apartment construction in Canada:

There are 300 to 400 new apartment buildings either in the planning stages or under construction in Canada, according to Lobo, who said: “When looking at apartments in Canada, I’m generally underwhelmed. I think there could be a lot more creativity, better amenity spaces and better apartment design.

“Developers are often surprised to hear that the lobby of the apartment building should look better than the condo lobby. In the apartment business, it’s about the arrival experience. In a condo, people buy them from plans.”

Lobo said some condominium developers make the mistake of not including leasing offices when they construct apartment buildings. They should also include back exits and enough elevators to accommodate the 30 to 40 per cent turnover rates in apartments, which is much higher than in condos. He added that apartments should be built more robustly since tenants might not take as good care of them as people who own their units in condos.

Lobo said Waterloo, Ont. is the only place in Canada that’s overbuilt, and that’s due to student apartments.

“That was a phenomenon that occurred where the City of Waterloo changed zoning where there were two universities close together and a lot of developers jumped in and built five-bedroom, two-bath student housing. They all filled up pretty well, but I think we’re reaching a saturation point now.”

London, Ont. has a good balance of rental supply, as just 30.6 per cent of the people living in rented dwellings are doing so in secondary rental units. That compares to 99.1 per cent in Vaughan, Ont., 47.9 per cent in Hamilton and 46 per cent in Toronto.

“There’s demand almost everywhere because we’ve had a 30- or 40-year hiatus in building apartments and the population is growing,” said Lobo. “Even in small towns throughout Ontario, there’s an aging population that wants to leave their house and they’re not ready for a retirement home and they’re forced to stay in their home longer or sell their home and move into a condominium.”

Lobo said that apartment product in Alberta is even more underwhelming than in other parts of Canada and that, while there was a vacancy spike when the price of oil and gas went through its most recent collapse, rates are going back down again.

“The apartment sector was nowhere near being overbuilt and there’s probably room to keep building in Alberta. I don’t think it’s as bad as people think.”

Lobo said members of the 25 to 34 age group in Toronto sleep in their apartments but live in the building and its surrounding neighbourhood, so they’re okay with smaller units in amenity-rich buildings in central locations with access to public transit. Since they don’t have cars, they have more money to spend on rent.

People also tend to move more now, so renting is often easier than owning and home ownership isn’t as important to younger generations as it was to their predecessors. Even for those who want to buy, it’s becoming more difficult to afford down payments since prices have risen so much.

The potential impact of a housing price bubble burst:

Lobo said the apartment market in the United States took off after the 2008 housing meltdown and, if the bubble bursts in Canada, the effect on rental housing should be minimal or even positive.

Whether to build a condominium or rental apartment:

“A condo developer builds condos for business income,” said Lobo. “You build it, you sell it, you pay your taxes and you do it again.”

The apartment business is different and is about wealth preservation, tax deferral and cash flow, according to Lobo.

“If population growth is high, if there are hardly any apartments there, if people are younger or older or both, and if incomes are high, there’s a good chance that apartments will work. If all of those things are the opposite, then you probably shouldn’t build an apartment.”