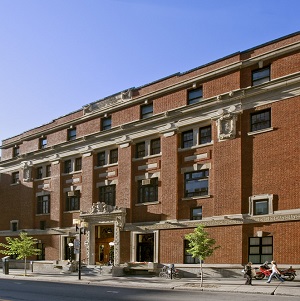 Costs for the air rights were not divulged, but the agreement includes $20 million to reconstruct the sports club and preserve and restore its exterior facade to its original appearance, which has partially been lost over the years.

First of its type in Quebec

Devimco met with the City of Montreal, Quebec’s Ministry of Culture and the heritage group Heritage Montreal before proceeding with the project which is the first mixed-use development of its type in Quebec, says Devimco president Serge Goulet.

Goulet says Devimco beat out 12 to 15 other developers who responded to a call to offer for the Club Sportif MAA’s air rights.

Pierre Blanchet, president and CEO of Club Sportif MAA, says Devimco was selected to spearhead the project for its experience in development and in mixed-use projects and because it offered the fastest timeline to relocate club members.

“It’s an amazing project for Montrealers (and) for our members ,” Blanchet says.

Construction to begin in August

The name and final designs plans have not been released for the condominium, which will be designed by the architectural firm LemayMichaud.

However, Devimco will begin marketing the condo soon, first privately to club members and others, and then to the public via online registrations. Goulet says some potential buyers have already contacted Devimco to reserve condos before news of the development was made public.

Devimco has not yet decided on costs for the condos, which will range from studios to 7,500-square-foot penthouses. “We’re in the midst of finalizing how many studios, two-bedroom and three-bedroom units there will be,” Goulet says.

The Montreal Amateur Athletic Association Club “was on the brink of bankruptcy in 1999” but was saved by about 80 members who reinvested in the building, and transformed it into the Club Sportif MAA, Blanchet says. He says the situation is much improved today.

“We’re not doing this because the club is in difficulty; we’re doing this to make sure the club will remain here for the next 100 years.”

For the first time, the club will have a bistro and restaurant and its collection of sports trophies, artifacts and other historical documents will be put on public display.

During construction, the Club Sportif MAA will be temporarily relocated. A temporary site in the neighbourhood has not yet been found and members will be allowed to cancel their memberships if the location does not suit them.

Condo owners will not only benefit from an excellent location downtown, but they will be able to tap into the services of the club below, says Marco Fontaine, an advisor to Devimco and president of the advisory firm Premius Conseil. This will distinguish the project from competitors’ offerings, he says.

Condo buyers will be given a temporary membership to the Club Sportif MAA. Membership costs vary from $99 to $130 a month.

Given that the club has its own pool, the condo project will not include a pool among its offerings, but will offer something different to compensate, Goulet says. The condo will have a number of common areas and two floors of underground parking.

“The ability to do cross-marketing with the MAA branding will be a very attractive asset” of the condo, Goulet says.

Founded in 1881, as a result of the merger of the Montreal Snow Show Club, Montreal Lacrosse Club and Montreal Bicycle Club, Club Sportif MAA is the oldest club of its kind in North America, says Nathalie Lambert, director, sports programs and communications at Club Sportif MAA and a former Olympic athlete.

It has been at its Peel Street location since 1905.

Members of the club won the inaugural Stanley Cup in 1893 and Lord Stanley (who donated the Cup) was one of its founding members.  The club’s football team also won the Grey Cup in 1931.

Devimco, which sold one-third of all new residential condos bought in downtown Montreal last year, was the developer behind the giant lifestyle complex Quartier Dix30 in Brossard on the South Shore of the city. It has also developed a number of condominiums in the fast-growing Griffintown neighbourhood of Montreal.

Among its current projects is the $1.3-billion Solar Uniquartier in Brossard, which comprises 4.5 million square feet and includes 2,500 residential units.

Devimco is also building Square Children’s, which includes a number of condos on the site of the former Montreal Children’s Hospital, and a $500-million mixed-use project above the Longueuil-Université de Montréal métro station.