Home sales and prices in Ontario’s Durham Region rose significantly last year, and early indicators show no reasons for that trend to slow in 2017. 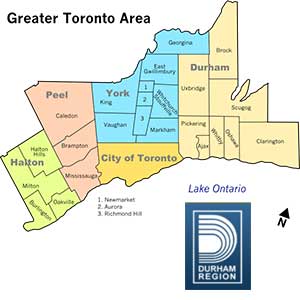 The average residential sale price in the region east of Toronto rose by nearly 20 per cent year-over-year in 2016 to $527,285, while sales rose to 11,700 from 10,910 during the January to October period for those respective years.

The 595 sales reported by the Toronto Real Estate Board last month represented a 17 per cent increase over January 2016, while the average selling price of a home rose by 36 per cent to $608,417 and the average number of days on the market fell from 23 days to 15.

“Homes in Durham Region are still attractively priced compared to Toronto,” said Jackie Goodlet, a Whitby, Ont. broker whose team’s 235 transactions worth more than $185 million last year were the most in the 30-year history of RE/MAX Rouge River Realty Ltd.

“High demand and low inventory, along with unprecedented low interest rates, continue to attract buyers to the region.”

There’s a wide assortment of homes being built in the region in response to the Durham housing plan that was launched in 2014 and set four goal guidelines: ending homelessness in Durham; affordable rent for everyone; greater housing choices; and creating strong and vibrant neighbourhoods.

Condominium apartment sales in Durham are up 48 per cent, semi-detached home sales rose 35 per cent and detached and townhouse sales are both up by about 20 per cent from this time last year.

Goodlet specializes in luxury home sales and said people from the Greater Toronto Area are selling their houses for premium prices in order to purchase much larger, high-end properties in Durham.

“High-end luxury home buyers are looking for large estate lots with open concept layouts and professional-style kitchens,” Goodlet said. “Outside living spaces must also be fully functional for entertaining, with all the bells and whistles included, while bathrooms must have the look and feel of a spa-like atmosphere.

“Smart home technology is in high demand, enabling the homeowner to control many aspects of the home with the touch of a button.

“Closets need to look like a designer showroom with marble flooring. Large islands with marble countertops are in demand, as are custom-built floor-to-ceiling drawers and shelving, topped off with a chandelier and lots of flattering mirrors.”

“The extension of the 407 highway and the addition of the 412 and 418 highways, along with the planned expansion of the GO train, definitely played a factor in the rising demand and price increase seen in Durham Region,” said Goodlet.

“The projects will make it easier for buyers to commute to jobs in Toronto, providing people with alternative travel routes and transportation methods.”

Phase two of the 407 extension is expected to begin in the near future, bringing the highway further east to Highway 35.

Goodlet is confident that the exodus of homebuyers from Toronto to Durham will continue not only because of the aforementioned factors, but also due to other economic factors.

“The future of the Durham housing market looks bright, with the announcement of the Ontario government injecting $8.2 million from the gas tax program into transportation, with further funding to follow.

“We expect the land transfer tax approved by Toronto city council to drive more buyers to Durham, while the first-time homebuyer refund increase to $4,000, effective as of January 1, makes Durham even more attractive to potential first-time homeowners.”