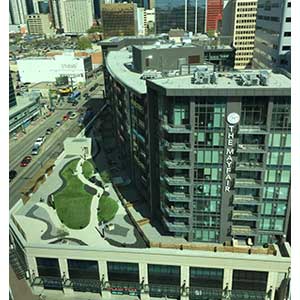 The city was struggling with an oil-price-crash recession and unemployment woes.

Despite all that, market watchers are positive about the city’s rental market, a sector known for its stability.

The Conference Board of Canada in mid October predicted Edmonton’s GDP will grow by 3.9 per cent this year, second only to Calgary among Canadian cities. The board declared the worst appears to be over for the two Alberta cities.

“I think there is some optimism,” says Raphael Yau, Edmonton-based senior associate, multi-family sales, capital markets group for commercial real estate firm Cushman and Wakefield. “There is definitely talk about some of the pension funds and some of the money out East and even from out West on the Vancouver side looking at Edmonton because our returns are still reasonable.”

Canadian Mortgage and Housing Corporation reported Edmonton’s vacancy rate at 7.1 per cent at the end of 2016, the highest since 1996.

“It’s a little bit of a shock to landlords. But it’s probably the most stable commercial real estate investment, even with seven, eight or 10 per cent vacancy,” says Yau.

“Unless you bought in the last 12 months and you paid a little too much, you’re not hurting too badly because financing is still pretty cheap and even at seven per cent vacancy you’ve still got cash flowing.”

“There’s starting to be more activity and more interest and demand but vendors are still struggling with pricing their buildings because vacancy is still an issue, especially in traditional stock – older buildings even with renovations,” says Yau.

Edmonton is about the middle of the pack for rental density among Canadian cities, but it is double the rental density of Calgary, according to Derek Lobo, CEO of SVN Rock Advisors, a commercial brokerage and advisory company based in Burlington, Ont.

“There’s more propensity to rent in Edmonton than Calgary,” says George Schluessel, owner of  property development and management firm ProCura. “Calgary is more white-collar. People are more inclined to purchase single-family whereas Edmonton is a larger service market, more institutions, more government and all this, schools and all that so you have a larger broad base for rentals.”

“I sold out all my Calgary assets. I lost faith in Calgary, so I’m just going to focus on Edmonton. Calgary has highs and lows – I find it’s very risky when you have such highs and lows that are tied to the price of oil.”

ProCura builds condo-quality buildings, such as the 238-suite The Mayfair on Jasper, a 10-storey building on a high traffic corner in the heart of the city. Schluessel says his firm started leasing the Mayfair at the end of October 2016 and had it 99 per cent occupied in eight months.

Location is a key driver for Schluessel. The firm is building out its Century Park complex on Edmonton’s Light Rail Transit line south of the University of Alberta.

“Couples really don’t want to own two cars anymore. They want to be near transit where one person can take transit and one vehicle so they have at most one parking stall.”

ProCura has land to build another 6,000 units, says Schluessel.

Lobo says Western Canada in general is undersupplied with apartments compared to Eastern Canada and the market has been strong despite the downturn in Alberta.

“Apartments are the most recession-proof business that there is,” says Lobo. “People always need a place to live. Even right now in Alberta, there’s been no decrease in price of rental apartments in terms of valuations.”

People will choose to stop going to restaurants but “nobody wants to move down in their quality of housing unless it’s catastrophic for them,” he says.

Lobo says some new construction has started in Edmonton,  “But I would say it’s a glacier not a wave.”

As of August 2017, CMHC was reporting 1,315 units under construction in the greater Edmonton area.