A developer with a $100-million project on the line urged Edmonton city council this week to stick with its commitment to light rail transit (LRT). 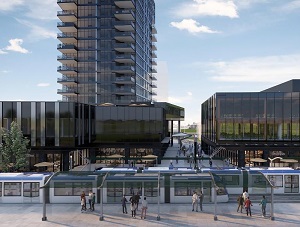 An artist’s rendering of the Edmonton West Block development, being constructed by the InHouse division of Beaverbrook Developments. (Image courtesy InHouse / Beaverbrook))

Salima Kheraj, of the InHouse division of Beaverbrook Group, says she thinks “the message was heard” when she and her partner spoke at Monday’s council meeting as councillors debated whether bus rapid transit (BRT) or light rail transit is more cost-effective.

“We know that council is advancing some more detailed design and considering some potential changes, or tweaks to the west leg of the LRT and we just wanted to make sure they realize we’ve made a commitment based on the original plan for the LRT,” Kheraj told RENX.

InHouse’s large-scale, mixed-use development is at the corner of Stony Plain Road and 142nd Street. The project’s condo tower, slated for completion in early 2019, is already 65 per cent sold.

Last fall’s municipal election campaign included debate on the high cost of LRT and whether bus rapid transit (BRT) might be an option. New councillor Tim Cartmell plans to bring a motion to next week’s council meeting asking for an analysis of the difference in costs between LRT and BRT for the city’s west end.

If council votes to have administration do the report, it should be available for a crucial vote on the west LRT scheduled for March 21.

Scott McKeen, councillor for the downtown district that includes West Block, says the councillors heard from administration Monday that while BRT costs 20 per cent less than LRT capital-wise, it costs more to operate and moves fewer riders.

“LRT has been confirmed since 2009 and I have not seen any startling new information that would throw us off that track,” says McKeen. “If you want to redevelop a project like West Block and put that kind of investment into it, knowing that there’s going to be an LRT stop there gives you much more confidence.”

Mayor Don Iveson is also an LRT supporter. The Valley Line West route, which runs from downtown to the Lewis Estates community, has been set by council as a transit priority. It has received federal design funding, but further details and funding must still be approved.

Kheraj says the West Block project would work without LRT, but the firm has already planned how a future LRT station would fit into its design.

The first phase of West Block includes the condo tower, with 60 units ranging from $550,000 to $2.9 million. The tower podium will have retail space on the main floor and office space on the second floor.

A three-storey commercial building will include more ground-floor retail and offices above. A large parkade in Phase 1 will also serve buildings planned for later phases. An open plaza, spreading from the proposed LRT station, is the showcase of the site.

“That public plaza is the focal point of our development,” says Kheraj. “It’s situated south facing right on Stony Plain Road. The whole concept of our design and our collaboration with the City of Edmonton, when we went through the  rezoning phase of the project and when we started this project . . . we knew this was a future LRT stop.

“The LRT platform is immediately in front of our urban square so as you step off the train and the platform, you literally land in the focal point of the overall West Block project.”

The plan is for the likes of restaurants, cafes, a gym, a spa and other services for the surrounding community as well as residents of West Block to surround the plaza.

“As we market and as we plan it out, knowing the timing of LRT helps us solidify what our plans are for the balance of the site,” says Kheraj.

The entire InHouse site is 3.5 acres. The firm proposes to include two more towers and some townhouses on the site, but the exact mix of uses has yet to be determined.

Beaverbrook acquired the West Block site in 2015 after the previous developer went broke. The Skyline Glenora developer’s failure in 2014 left an unsightly open construction site in the centre of two upscale neighbourhoods.

Beaverbrook president George Cantalini took the unusual step at the time of paying back seven of the original purchasers’ deposits which hadn’t been protected by trust arrangements.

“That probably did more to give developers a good name in the city than anything done in the last 20 years,” says McKeen.

InHouse has two other projects in the works. The CX project in the Grandin neighbourhood close to downtown Edmonton is a six-storey mix of condos and stacked two-storey townhouses. The townhouses are made of glulam (a fused wood product with the strength of concrete) and structural steel, says Kheraj.

A property in the Whyte Avenue area is still under consideration, says Kheraj.