Ottawa’s Taggart Group of Companies has a one-word underlying strategy to its development and construction business: Land. 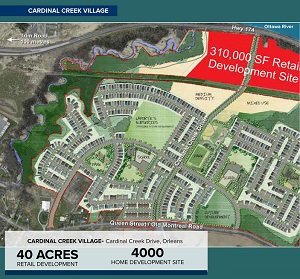 Taggart has spent 70 years seeking out and buying what is now the largest portfolio of commercial development land in Ottawa and Eastern Ontario. When the time is right, the multi-faceted, family-owned business also has the resources to see its investment through.

“A very productive way to grow the business is by doing it from the land up,” said Jeff Parkes, vice-president of development at Taggart’s investment division. “We invest in land.

“Our No. 1 source for new projects is buying in strategically well-located sites.”

Taggart handles virtually all aspects of the commercial real estate cycle, from development and property management all the way to third-party general contracting.

“We have chosen to hold our investments rather than develop and sell,” said Parkes. “We’ve been able to grow the portfolio as the company has grown as a whole, reinvesting into new developments which benefit the other businesses within the group.”

The Taggart group has been operating since 1948, when Taggart Construction was created by Harold Taggart. During that time, three generations of family members have been involved in managing the businesses.

Today, Taggart continues to adapt its businesses to new market trends and conditions.

Taggart Realty Management, which focuses on land development, has about 2,000 acres of land available for development between Ottawa and Kingston. Parkes currently oversees $100 million worth of new mixed-use and retail development on that land, much of the activity in the rapidly growing Southern and Western sectors of Ottawa.

Its move into more extensive commercial development has come during the past two decades.

Before its first retail development, the Signature Centre in Kanata which was completed in 2001, Taggart’s commercial properties came via acquisitions.

Today, including some land held in partnerships, Taggart has 150 acres marked for this type of development.

Among its current commercial projects is the Kanata West Centre, a 300,000-square-foot retail site anchored by a Cabela’s outdoors store and Princess Auto. It’s across the road from an existing Tanger Outlet Mall and amidst other proposed developments around the Canadian Tire Centre, the current home of the NHL’s Ottawa Senators.

The size of the Kanata West Centre makes it one of Taggart’s largest projects.

“The 100,000-square-foot range is our kind of niche,” said Julie Taggart, vice-president of operations and leasing. “You’ll always need a service plaza in the market. You’re always going to need a grocery store, a dry cleaner, a dentist and some quick service restaurants . . . the service uses that will never go away, which you can’t buy on the internet.”

Later this year, Taggart will begin development of another of these developments. The 60,000-square-foot Shops of Eagleson Road will be located in nearby Kanata South.

Also part of the plan is a mixed-use project with a 200-unit retirement home. That will be developed by a partner with expertise in the retirement living sector — though Taggart isn’t releasing any further details at this point.

In the east end of Ottawa, Taggart recently completed the Shops Of Tenth Line Road, a 100,000-square-foot shopping centre in Orleans, anchored by a 48,000-square-foot Sobeys (EMP-A-T).

The Cardinal Creek Centre, also in Orleans, will be another major endeavor. It is planned as a 350,000-square-foot mixed-use development near Highway 174, with residential potential and easy access to transit along the east-west light rail transit line scheduled to open late in 2018.

It will service the Cardinal Creek Village community being developed by Tamarack, and surrounding residential areas where up to 4,000 homes are planned.

In addition to Cardinal Creek, Taggart’s West End holdings are within reach of the next phase in Ottawa’s planned rapid transit extensions. The Kanata West Centre, which is located within the Kanata West Business Park, is within a couple of hundred metres of one of the proposed stations.

“For potential businesses wanting to locate to that (Kanata West Centre) area, all the amenities are already in place with Tanger Outlet Mall there,” Parkes said. “There are restaurants and residential units within walking distance, so we’ve got an opportunity to provide businesses a real live-work-play environment there.”