A 48,000 square foot office building has opened in the first phase of a $55 million commercial development located on a strategic site in a trucking corridor on Montreal’s South Shore. 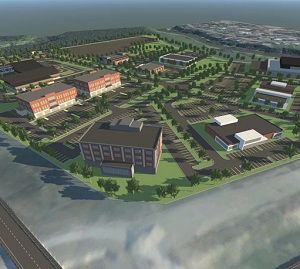 The Espace 30 Beauharnois in Beauharnois just off Highway 30, will become a regional commercial centre with a planned hotel, second office building, several shops and services, car dealerships and services for truckers. It’s being developed by the Fonds immobilier de solidarité FTQ – which has 40 per cent equity in the project, Groupe Custeau and Groupe Lagacé immobilier.

“Since (Highway) 30 was extended to Beauharnois and Valleyfield, it’s become a strategic location,” she says, calling it a “supra-regional hub” also served by nearby highways 15 and 40, the port of Valleyfield and the CSX rail system.

About 30,000 vehicles on Highway 30 pass by the site daily, of which about 25 per cent are trucks, and there are few hotels within a 30-km radius.

The more-than-1.4-million-square-foot site also faces a new Ikea distribution centre. It’s located between Vaudreuil-Dorion, Salaberry-de-Valleyfield and Châteauguay and is near Bois Robert, a wooded area with 10 kilometres of trails recognized as a protected area.

The first building completed on the site is the 48,000 square foot Édifice La Centrale office building which models its architecture on the nearby 86-year-old Beauharnois Generating Station operated by Hydro Quebec. Tenants include the first regional office of Farm Credit Canada and an architectural firm.

Negotiations are underway with hoteliers to build a regional hotel with about 50 rooms. “The mayor (of Beauharnois) said there’s a crying need for a hotel. They often have conventions and there’s no place nearby to stay.”

The project should take four to five years to complete, Handfield says. Infrastructure work at the site is complete which should speed up leasing among tenants who were previously hesitant to commit, she says.

While the Fonds has known Groupe Custeau and Groupe Lagacé for a long time, Espace 30 Beauharnois marks the first time it has teamed up with either company.

The Fonds de solidarité FTQ is a development capital investment fund that channels the savings of Quebecers into investments. As at May 31, 2017, the organization had $13.1 billion in net assets.

The Fonds immobilier, which is part of the Fonds de solidarité FTQ, backs residential, office, commercial, institutional and industrial projects across Quebec. As at December 31, 2017, it had 47 projects in development or in construction, 53 properties under management and 14 million square feet of land for development

Founded 25 years ago, Groupe Custeau is a Sherbrooke, Quebec-based family-run real estate development and management company that is currently developing the residential projects Cité Jardin Sherbrooke and Domaine LongChamp in the city.

Sorel-based Groupe Lagacé, which is also family-run, is currently developing residential projects in the Sorel-Tracy area.

Handfield says the Fonds is approached to provide equity for more projects than it can handle. “We look at several projects before doing one.”

The Fonds accepts a higher percentage of proposed projects in the residential sector – about 70 per cent – “because the entrepreneurs who come see us are often already established in the market. They already know their market.”

Developers often approach the Fonds with projects that aren’t well-positioned “and we try to help reposition the project so that we can partner with them,” she says.

For example, a proposed rental housing project may be better suited as a condo development. “We’ll talk to the partner to see if we can review the market and product with our financial market analysts. We’ll try to find a solution to do a project.”

Handfield, who has more than 35 years of real estate experience, joined the Fonds immobilier de solidarité FTQ in 2013. She is responsible for growing the investment portfolio by developing projects in all segments of real estate – residential, commercial, office, industrial, community and affordable housing and social infrastructure projects.

During her career, Handfield developed several condos in Quebec City. Most notably, she spent 13 years in Poland overseeing the activities of Kanada Polska Kabaty, a Warsaw-based company owned by a Quebec consortium involved in the development, construction and management of residential and commercial properties in Warsaw. She has also been involved in acquisitions in Florida, Calgary and Bogota, Colombia.

Handfield decided to join the Fonds immobilier – where she plans to finish her career – because she was “impressed with its mission to develop jobs and contribute to economic development in Quebec. As an expatriate for several years, it was a way for me to give back the expertise I picked up in real estate development.”