Oxford Properties Group continues to enhance its food and beverage offerings at its shopping centres, with Upper Canada Mall in Newmarket, Ont., being the latest. 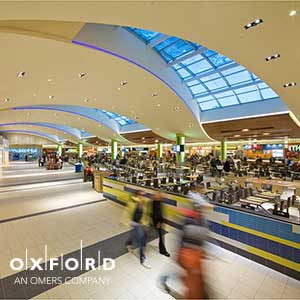 “The benefit of food and beverage is increasing dwell time for customers and offering something unique,” said Upper Canada Mall general manager Bri-Ann Stuart. “In order to stay competitive, we have to provide our customers with an experience.”

Upper Canada Mall is located at 17600 Yonge St., close to major east-west thoroughfare Davis Drive, in the town of 85,000 north of Toronto in York Region.

Construction began this month on a $60-million redevelopment that involves the expansion of a former Target store that’s been vacant since the American retailer pulled out of Canada two years ago.

It includes the introduction of a 40,000-square-foot first-to-market concept, called Food Market for now until it’s rebranded closer to opening next year, which will comprise approximately 25 vendors with an assortment of fresh foods and prepared take-away options, including produce, a butcher shop, fishmonger, cheese shop, bakery, juice bar and gourmet gift shop.

It will also include full-service restaurants at a Yonge Street-facing entrance.

“Some of it will be local and some could be from the GTA (Greater Toronto Area),” Stuart said when asked what vendors would be included. “But our focal point is best in class.”

Target had an anchor location at one end of Upper Canada Mall and, while construction always brings challenges, Stuart expects “minimal disruption” to the rest of the centre, which is co-owned by Oxford and Canadian Pension Plan Investment Board (CPPIB) and managed by Oxford.

The redevelopment also includes moving a two-level Sport Chek store at the back of the shopping centre to a one-level, 64,000-square-foot location with access to Yonge Street.

Stuart won’t reveal the plans for the space vacated by Sport Chek.

Upper Canada Mall will also feature a new two-level feature court space and a 35,000-square-foot vertical expansion. Details are being withheld on those aspects of the redevelopment as well.

“We want to keep evolving.”

While the Upper Canada Mall redevelopment is scheduled to open in 2018, Stuart said business is rolling along well at the 968,000-square-foot centre that includes such retailers as Zara, Victoria’s Secret, Apple, Aritzia, Sephora, MAC Cosmetics, Michael Kors and Brandy Melville.

“We have a great customer base and fantastic demographics and we work really hard to be ahead of the curve and provide customers with what they’re looking for.”