A new report says the Ontario government is directing growth to locations and built forms that don’t align with demand in the marketplace, resulting in skewed housing values in the short run. 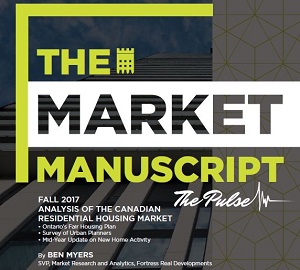 The Fall 2017 Fortress Market Manuscript, which analyzes the Canadian residential housing market, was released this week.

“The growth targets may be beneficial from a financial, political and environmental perspective, but they have severe supply implications and major repercussions on housing values,” says The Market Manuscript – an analysis of the Canadian residential housing market, authored by Ben Myers, senior vice-president of Market Research and Analytics for Fortress Real Developments.

Fifty-six per cent of Ontario urban planners surveyed by Fortress believe urban containment policies such as the Places to Grow and the Greenbelt Acts contribute to the high new home prices in the GTA.

Just under 35 per cent of professional planners working in the private industry felt GTA municipal approvals were taking too long, and are partially responsible for higher house prices.

The report also says low-rise new home supply is being impeded by a lack of servicing allocation and intensification targets that don’t align with underlying housing demand.

“Intensification targets are out of keeping with market preferences. Public sector policy insists on behavioural change from (the) general population in its housing choices. However, those preferences for low-rise built forms are long-held and tough to change,” adds the report.

“People still like that backyard, that front-loaded garage, that quiet cul de sac. But from an overarching point it’s eating up lots of farmland. They’re driving long distances to their work, that’s not want the province wants.

“They want you in more high-density like townhomes, stacked townhomes, and apartments. There’s a kind of disconnect with what people want from a shelter perspective and the way growth is being directed,” says Myers.

“Yes, you see the growth in condominiums. People are taking to condominium living and living downtown. But there’s always going to be that portion of people, especially young families, that want that traditional American dream-type situation and look for that housing to be built. And population continues to grow at a very strong pace and it’s driving up the price of that type of housing.”

GTA buyers are driving record new home transactions and prices in low-rise subdivisions outside the GTA, says the report.

It cites Altus data showing there are 6,000 more Greater Golden Horseshoe low-rise sales outside the GTA than there were two years ago; the lion’s share of these buyers are likely GTAers that now commute considerable distances to work.

“Many, if not most, of these commuters should have been accommodated closer to their place of employment. It is likely that a small share of these people are self-employed, and are taking their jobs with them. Sprawl in the GTA may have been reduced, but it has been moved somewhere else,” says Fortress.

“Forcing people to move away from their friends and family to find adequate housing is clearly a negative effect of reducing GTA sprawl, and one that cannot be measured in dollars and cents. It has been mentioned several times and we’ll repeat it here again, a reduction in sprawl leads to a reduction in the type of units that people desire (single-family homes), driving up the value of existing ground-oriented housing.

“Higher and rapidly rising values lead to more speculative investment, but also lead to more protectionist and NIMBY attitudes, as owners now have that much more financial incentive to protect their high-value and rapidly-rising asset.”

Thirty-seven per cent of urban planners who responded to the Fortress survey felt investing in infrastructure such as pumping stations, trunk sewers, transit, and roads, is key to accommodating more home buyers in the GTA.

“The GGH intensification targets are unreasonable, especially for the outer-suburban communities. Restrictive planning policies, development charges, the price of land, and other costs of infill housing contribute to higher per-unit housing costs, resulting in smaller housing for the same price,” says Fortress.

Other highlights in Fortress Market Manuscript

* Toronto had the fourth-highest annual residential price growth among top global cities in the first quarter of 2017 at 25 per cent. Toronto-area resale prices moved from about $626,000 mid-year 2015 to $852,000 in April 2017, peaking at a 26 per cent annual increase;
* Between early 2005 and the fall of 2006, Calgary resale house prices increased from just under $260,000 to over $400,000. The bubble peaked at 41 per cent annual growth;
* The median price of an existing home in the Vancouver area rose from $760,000 to $1.04 million between late 2014 and the spring of 2016, peaking at a 29 per cent year-over-year gain
* In April, 16 housing measures were introduced by the Ontario government in its Fair Housing Plan with the intent to help people find affordable homes, increase residential housing supply, protect buyers and renters, and bring stability to the real estate market.

The Fortress report says a poll of 464 economists showed 93 per cent of respondents agreed, either completely or with provisions, a ceiling on rents reduces the quantity and quality of housing available.