While mixed-use projects make a lot of sense, getting them right isn’t always easy according to three experts who spoke on the subject on Sept. 7 at the Canadian Apartment Investment Conference at the Metro Toronto Convention Centre. 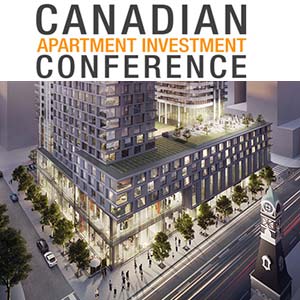 “Mixed-use should not be the exception but the rule,” said Quadrangle Architects Limited principal and co-founder Les Klein.

“We’re trying to recover from a 100-year-long legacy of exclusionary zoning — which is the separation of uses between living, working and building and creating in the name of health — that was fuelled furthermore by the mobility that the automobile gave us. That allowed us to spread those uses out much further than they would have normally been had we not had that mode of transportation. We’re learning again how to create complete communities.”

“Great cities and great developments never end. One of the fundamental mistakes made over the past 25 years is that disposable real estate became the flavour of the decade. A Walmart is a disposable asset. It has a shelf life and a redevelopment opportunity. But when you’re dealing with apartments, in theory the time horizon is much longer.”

“People will spend millions of dollars on architecture but won’t spend appropriate amounts of money on understanding what they’re building and for whom.”

Klein talked about several Toronto mixed-use projects and divided them into categories.

Klein cited Aura Condominiums at Yonge and Gerrard, a 78-storey complex with residential, office, retail and quasi-community uses as an example of mixed-use in a single structure.

Yonge Sheppard Centre, an integrated complex of structures now undergoing a $300-million redevelopment, largely ignored its street element when it opened in 1976. That will change as the redevelopment, involving a partnership between RioCan Real Estate Investment Trust and KingSett Capital, includes the renovation and expansion of its retail space and the addition of a multi-unit rental residential component.

Providing community facilities and amenities is also important for mixed-use developments, including: the Musee Condominiums on Adelaide Street, which has retail at grade and a small community park; the Canary District and the addition of a YMCA to its residential and retail components; TIFF Bell Lightbox, which includes condominiums, offices and movie theatres; Tridel’s work with the Toronto District School Board to build a new North Toronto Collegiate Institute as part of a mixed-use development; and the Genesis Community Daycare Centre, which also includes a church.

“These kinds of elements create community but could not be done without private sector involvement,” said Klein. “We need to create cooperative environments in which these facilities can be built to a level that we expect today, given the lack of funding and focus by government.”

Spanier also brought up the success of Toronto’s Canary District as well as a project at 25 St. Dennis Dr. that includes 724 new purpose-built rental units (including 343 family units) and 12,000 square feet of retail at grade anchored by a daycare service that provides an amenity while increasing foot traffic and visitation to ancillary retail.

“It’s all about driving revenue and value to the property,” he said.

LiveWorkLearnPlay is involved with the Coliseum redevelopment project in New Haven, Conn., which sits on a 5.5-acre site near Yale University and a commuter train station providing access to Manhattan, N.Y., which is 90 minutes away. It will feature: 1,002 residential units; 75,000 square feet of retail; 200,000 square feet of class-A office or medical campus space; a four-star hotel; 15,000 square feet of multi-function space; 40,000 square feet of public space with a retail lane; and between 500 and 1,000 underground and deck parking spaces.

Humphreys discussed Newport On The Levee Aloft Hotel in Newport, Ky. and The Residences at The Ritz Carlton in Dallas, where he lives, which both combine residences and hotels. While some amenities and back end functions can be shared, he stressed the importance of separating such elements as lobbies and swimming pools in order to build a sense of community among long-term residents while also making them feel more secure.

Humphreys has also enjoyed success with incorporating Whole Foods Market, which provides more conveniences than most grocery stores, into residential complexes including 222 Hennepin in Minneapolis, Minn., The Local in Tempe, Az., Journal Square in Jersey City, N.J. and One Orchard in Denver, Colo.

Humphreys is also involved with a major project in Kitchener, Ont. across the street from Google’s offices that has apartments, offices, a hotel, a park in the middle and restaurants wrapping around the complex.

Humphreys generally favours rental apartments over condominiums for mixed-use developments since they act as an annuity and apartment owners aim “to make sure that asset performs the best it can by taking care of it.” Apartment owners can also hold events to create a sense of community among tenants, which has more economic importance than some may think, according to Humphreys.

“If a resident in a rental community meets someone and becomes friends with them, there’s a 25 per cent chance they’ll renew their lease next year. If they meet two people and become friends, it’s 50 per cent. And if they meet three, it jumps to 100 per cent that they’ll renew next year because now they live with people they know and it’s a neighbourhood.”

More purpose-built apartments are being built because pension funds and real estate investment trusts with long-term horizons are becoming involved, according to Spanier, and he believes that some of them should be part of mixed-use developments.

“When you go all in on one asset class and that asset class tanks, and they all do from time to time, you’re totally exposed. In mixed-use you can hedge your bet by having a mix of uses and transform some of these developments over time by redeveloping that use.”