Proposed Ontario government policies regarding rental housing introduced in the spring were still a major topic of discussion at Wednesday’s Canadian Apartment Investment Conference at the Metro Toronto Convention Centre. 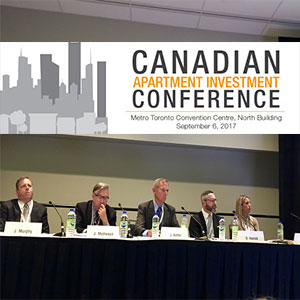 “It’s not that there aren’t issues with the current system,” said John Matheson, principal of StrategyCorp, a Toronto-based government relations and advocacy, communications and management consulting firm.

“It’s whether taking it apart and ripping out a piece is the right solution or not.”

Aird & Berlis LLP partner Robert Doumani explained some of the minutiae regarding the replacement of the Ontario Municipal Board (OMB) with the Local Planning Appeal Tribunal (LPAT), while Cohen Highley LLP partner Joe Hoffer did the same for rent controls to open a panel discussion moderated by McCarthy Tetrault real property and planning associate Charlene Schafer.

The Kathleen Wynne-led Liberal government introduced new legislation in May that, if passed, would “overhaul the province’s land-use planning appeals system, giving communities a stronger voice and ensuring people have access to faster, fairer and more affordable hearings.”

Doumani, however, called the proposed appeal process “convoluted” and said municipal councilors may have their hands tied when it comes to decision making.

“There’s a large measure of top-down control by the province.”

While Matheson called the OMB appeal process “clunking and slow,” he fears the LPAT system may be even slower because matters may be pushed to the Court of Appeal for Ontario.

“We had a balanced system that had one part political review by politicians,” he said, adding decisions influenced by politics could always be appealed to the OMB for a “principled legal review.”

Rent controls would include all private units

The facet of the plan that attracted the most attention was expanding rent control to all private rental units in Ontario, including those built after 1991, and capping annual rent increases at 2.5 per cent.

Vacancy decontrol, where rents can be increased by more than 2.5 per cent upon tenant turnover, will remain in place. The Ontario New Democratic Party, however, would like to get rid of that as well.

With an Ontario election scheduled to be held on or before June 7, 2018, Federation of Rental-housing Providers of Ontario president and chief executive officer Jim Murphy said his organization is talking to representatives of all of the major political parties to educate them about his members and the important role rentals play in the overall housing mix.

Starlight Investments has a portfolio of about 10,000 apartment units in the southern United States where there are no rent controls, and general counsel and vice-president of corporate development David Hanick described how things work.

“There’s a much higher turn of tenants. You’re dealing with market rents at all times. A contract is a contract and, when it’s over, you have to sign a new contract at the new market rent. Maybe it works in the tenant’s favour sometimes and maybe it doesn’t.”

The panelists didn’t think rent controls will have much of an effect on foreign investor interest in purpose-built apartment buildings, since other factors — including interest rates and currency values — will still likely play a larger role in such decisions.

“There are still really good deals in Canada compared to some other countries that foreign investors operate in,” said Hoffer. “It’s still money well spent.”

Hanick said Starlight was already looking at standardizing its Canadian leases similar to what the company has at its American properties.

He believes the appendices, covering more specific aspects of particular apartment buildings, will be the most important part of the standard leases.