An east-end Toronto site which had hosted bread factories since 1887 will become home for hundreds of people as a mixed-use development called Wonder Condos. 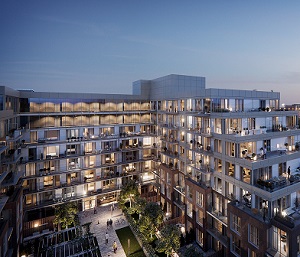 “Everyone knows it as the Weston bakery, but it was Brown’s Bread and General Bakeries for a lot longer,” said Neil Pattison, vice-president of development and project management for Graywood, which is co-developing the condominium project with Alterra.

The original bakery operating out of a home on Booth Avenue morphed into a factory through expansions in the 1920s and 1950s, and much of the nearly 100-year-old section will be preserved and integrated into Wonder Condos. The 1.5-acre site at Eastern and Logan Avenues in the Leslieville neighbourhood ceased baking operations in May 2014, and was acquired from the Weston family in June 2016 for $13.5 million.

“The price was a good price at the time, but it had a lot of strings attached and it’s taken us two years to go through all of those issues to get where we are today to launch the building,” said Pattison, who expects the final price of the project to approach $175 million.

Graywood is a 65 per cent owner and development manager, while Alterra owns the remaining 35 per cent and is the construction manager.

“We have a long history of association with each other, but this will be the first time that we’ve collaborated as active partners together,” said Alterra president and chief executive officer Robert Cooper. “Graywood is very strong on the development side and we’re very strong on the construction side, so it made a lot of sense.”

Toronto-based Alterra has built more than 5,000 homes and condo units across the Greater Toronto Area and Golden Horseshoe over the past 40-plus years.

Aside from converting the bakery’s former retail outlet to a presentation centre for sales, only the required exploratory work has been done on Wonder Condos thus far. Sales are now underway and if they go as expected and the necessary permits are obtained, demolition could start late this year or early in 2019 and take up to six months.

Wonder Condos will have approximately 250,000 square feet of floor space. Construction is expected to take three-and-a-half years, with occupancy targeted for late 2022.

Wonder Condos will have 286 units, featuring 110 different styles split between 60 per cent with two bedrooms, 30 per cent with one bedroom, and 10 per cent with three bedrooms. There will be 16 townhouses, 24 hard lofts, five soft lofts and the balance filled out by conventional condo units.

The average unit size will be 781 square feet, which Pattison said is significantly larger than the downtown average of 620 square feet. Many units will have large or wraparound terraces.

“We feel there’s nothing else like this on the market,” said Pattison. “These conversion projects are a finite resource. They don’t come up very often and, when they do, they’re very special.”

Diamond Schmitt was chosen as the architect while TACT Design will oversee the interior, converting and adapting the existing form into hard lofts and commercial space within a new eight-storey residential condo building.

The developers and design team worked with the city’s Heritage Preservation Services to ensure the appropriate conservation of the property during its conversion.

“We recognized that the existing building had some very interesting features and challenges that would lend themselves well to a multi-residential adaptive re-use of an existing building that really had run its course as far as being useful as a bread factory,” said Cooper.

“The location in South Leslieville was perfect for attracting homebuyers of all ages.”

The ground floor of Wonder Condos fronting Eastern Avenue will feature 11,000 square feet of commercial space. While no tenants have been lined up as of yet, Pattison said the developers will look at destination, as opposed to convenience-based, retail tenants. A locally owned restaurant is expected to be among the occupiers.

Wonder Condos’ amenities will include: a gym in the lower level with concrete ceilings and floors, exposed steel beams and brickwork; a multi-purpose family room; an eighth-floor party room with a large kitchen and dining room and outdoor terrace; two levels of underground parking with space for 200 vehicles; a bicycle storage space for each unit; a bike maintenance area; and a co-working lounge, since Leslieville has a growing population of creatives, makers and entrepreneurs.

Leslieville has gentrified and is flourishing with locally owned cafes, restaurants and stores on Queen Street East. The Queen streetcar is 200 metres north of Wonder Condos, and more public transit is expected to be added in the area within 20 years.

The downtown Toronto core is 3.5 kilometres to the west and the Martin Goodman Trail is 150 metres to the south, which should make cyclist residents of Wonder Condos happy.

“To the immediate south of us, you have this generational shift that’s about to take place, where the former industrial lands are going to be transformed into a new urban centre,” said Pattison. “Fifty thousand employees are earmarked to be working there in the next 20 years.”