Ottawa’s West End is undergoing a wave of development which will bring the area a new style of contemporary housing. 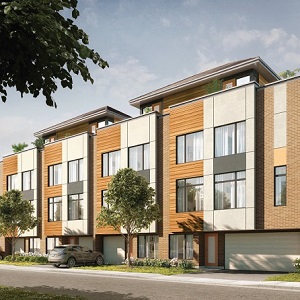 Fresh Towns is a project by Toronto-based Greatwise Developments which hopes to appeal to first-time home buyers and families.

When complete, Fresh Towns will consist of 90 townhomes, each equipped with its own private garage, as well as access to a private park and interiors by Ottawa’s West of Main Interior Design. Greatwise hopes to bring more visibility to the idea of rooftop towns, a concept relatively new to Ottawa.

Some of the houses will come equipped with rooftop terraces, allowing buyers to avoid maintenance required of traditional front and back yards.

For those who prefer the more traditional arrangement, some of the houses will offer that option as well.

“There are amenities that owners will have for themselves. You can enjoy the outdoors in kind of a very private way,” said Natan Ary, Greatwise Developments’ vice-president of development.

Greatwise Developments, founded in 1982, has been registered with Ontario’s Tarion Warranty Corporation since 1988. It functions as the development arm of the G&S Group of Companies, which owned the 3.2 acres of land upon which Fresh Towns sits.

“There were just old townhouses there. What we’re doing is bringing in that Fresh feeling,” said Ary.

Fresh Towns’ homes will have between 1,037 and 1,663 square feet of floor space, with prices starting at around $300,000 and moving up into the $400,000 range. With the average freehold home in Ottawa selling for $420,335 as of August, Greatwise hopes young families and first-time buyers will find the price point competitive.

The neighbourhood is also touted as as family-friendly thanks to its proximity to parks, schools, shops and transit, as well as easy access to Highways 416 and 417.

The development is located near the intersection of Baseline and Morrison, on land which was owned by the G&S Group of Companies for nearly 20 years before the company felt the time was right for such a project.

“The market has been slowly improving year-over-year in Ottawa. We’re seeing a very big shift from the baby boomers in terms of how they’re starting to live now, and a lot of their kids are looking at newer properties,” said Derek Nzeribe, managing director of Ottawa for Milborne Real Estate, the brokerage handling sales for the Fresh Towns project.

“They may be looking at something in that same neighbourhood that they’re familiar with, but a little more low-maintenance than what their parents had.”

The development of Greatwise’s Baseline property doesn’t stop at townhomes.

Qualicum Woods Crossing, a four-storey, 80-unit condo building, sits at the front of the site. This building has been completed, and units ranging from 403 to 1,117 square feet are available for purchase.

There are plans to begin marketing a second four- to five-storey condo building offering another 80 units, with the addition of a ground floor dedicated to retail. This project is expected to start in 2018 and be completed by 2020.

Greatwise currently has seven projects in development, four of which are located in Ottawa.

In addition to Qualicum Woods Crossing and Fresh Towns, Greatwise plans a rental apartment addition to its Norberry Residences property, and has approval to construct two 14-storey buildings in the Alta Vista neighbourhood at the intersection of Playfair and Kilborn. The company is still deciding whether they will be apartments or condos.

“We did a lot of market research. We really wanted to understand who our buyers were, what they’re looking for and what’s influencing their decisions. One of the things our buyers really liked was the fact that they had choice,” said Nzeribe.

“Not a lot of developers give them the choice to live the lifestyle that they want to live.”

Greatwise also has three projects planned in Toronto, including midtown, mid-rise condos, a community of five to six high-rise buildings that will be 20 to 27 storeys in North York. There is also a downtown mixed rental and condo project consisting of three buildings for which it is seeking approval.