Melcor Developments (MRD-T) remains bullish on the Calgary region with a whopping 14 major projects on the go. 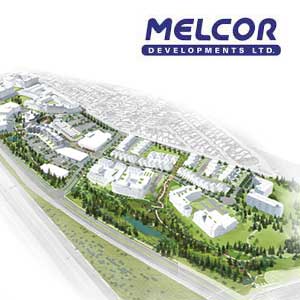 At the top of the list is the 70-acre Greenwich mixed-use development located across the TransCanada Highway from Winsport, formerly Canada Olympic Park.

“We’re actually incredibly busy right now. It’s one of the most exciting times for Melcor for the amount of stuff we have on the go,” says Graeme Melton, Melcor’s vice-president Community Development Division – Calgary Region.

“We remain confident in Calgary and Calgarians. The timing and location of our projects, which includes Greenwich, are such that we continue to find opportunities in and around our city.

“We adjusted our expectations and moderated our plans following the recession that started in 2014, and now we’re excited to see deals come together that we have been working on for the last few years.”

Melton says eight of the 14 projects are under development and the rest are in various stages of planning and approval. One is likely a few years away

“A lot of it is timing. We’ve been working really hard trying to advance planning approvals in the last few years,” says Melton.

The fact the economy is picking up has also helped get the ball rolling on some of the projects. The company has been working hard over the past couple of years to make deals for the proposed projects and “now we’re seeing people come to the table,” he says.

“Confidence has returned enough to now see some of these deals materialize. . . . It’s a combination of timing and the assets and the two things are working together.”

Jarrett Thompson, vice-president of new leasing and sales for Melcor, says the commercial area will also include hotel space and as a festival street with restaurants.

Melton says the commercial real estate will be spread out in about 12 buildings which would include mixed-use, standalone and office space.

Will include up to 1,200 residential units

Greenwich will also be able to include up to 1,200 townhouse and apartment units on a 15-acre core area in the middle of the property. Four homebuilders – two for townhomes and two for walk-up apartments – are expected to construct the residential component of Greenwich.

“In that particular area, we wanted it to be higher-density,” says Melton. “It’s important for us to get the density in there to help the success of our retail area.”

Construction on the project is expected to start at the end of 2018.

“Greenwich is in a sought-after area of Calgary that has seen very little new development in the last decade. We are creating a unique place that has no comparison in the northwest, one that will provide a new home for people, families, and business,” says Melton.

To capitalize on exposure to TransCanada Highway

He says Greenwich will capitalize from the direct exposure to the TransCanada Highway which sees about 58,000 vehicles per day and it will service the surrounding neighbourhoods of Valley Ridge, Crestmont, Bowness, Scenic Acres and Silver Springs.

Other major projects Melcor is currently proposing and developing in the Calgary area are: