While the Greater Toronto Area remains the investment focal point for Greybrook Realty Partners, its recent partnership in a Fort Lauderdale, Fla., acquisition is a sign of the asset management firm’s growing interest in the Sunshine State. 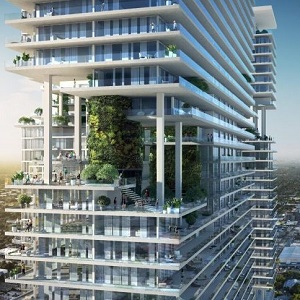 Greybrook Realty Partners has teamed with a U.S. developer on a two-tower, 1,100-unit project in Fort Lauderdale, Fla.

“Since the last recession in the U.S., Florida has emerged quite strong. They’ve changed some of their regulations and legislative components around development, and the state has been prospering from an economic growth perspective.

Greybrook announced earlier this year it had contributed $40.165 million to acquire and oversee the development of a parcel of land at 300 SW 1st Ave. in Fort Lauderdale with joint owner Property Markets Group (PMG).

The property is expected to be developed into two multi-residential rental towers consisting of approximately 1,100 luxury units and 37,500 square feet of retail.

It’s anticipated the first tower will be fully occupied in 2019, with the second to be ready three years later. While no decisions have yet been made about the project’s commercial element, Cucuz said it will likely include restaurant and retail components.

The estimated completion value of the development is US$655 million.

Fort Lauderdale is one of the largest cities in Florida, and the property is situated on the Las Olas Riverfront in the heart of its downtown between the art and entertainment and central business districts.

The location will offer future residents convenient access to entertainment and cultural amenities, millions of square feet of office and retail space, and an increasing number of transportation options as major infrastructure projects such as the All Aboard Florida passenger train and the Wave Streetcar reach completion.

While Miami and Fort Lauderdale have traditionally been vacation destinations for those from colder climates, the recent influx of young professionals aren’t necessarily looking for beachfront lifestyles or owning their own homes, according to Cucuz.

The Fort Lauderdale development is Greybrook’s second collaboration with New York-based PMG, which has completed 85 residential buildings in New York, Florida and Chicago and has more than 150 real estate projects throughout the United States.

Greybrook previously invested US$37.37 million in downtown Miami’s 300 Biscayne project, which will be built on an infill site across from Bayfront Park. Its 88 storeys will house more than 500 ultra-luxury condominium units. The development will have an estimated completion value of US$970 million.

Greybrook is looking for other South Florida investment opportunities in partnership with PMG.

‘We’re comfortable with PMG and want to grow into that market with other PMG projects,” said Cucuz. “For the foreseeable future we sort of thought about staying where we are and maybe acquiring one or two more sites with the same partner in the same region before we branch off into others.”

Toronto-based Greybrook’s real estate investment portfolio is expected to result in the development of more than 17 million square feet of residential and commercial space with an estimated completion value of $8 billion.