Greybrook Realty Partners Inc. and Marlin Spring have acquired a prime parcel of lakefront Toronto land and will develop a two-tower, mixed-use, high-rise condominium on the site. 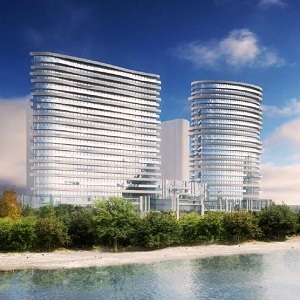 The towers will provide residents with unobstructed views of Lake Ontario — which will be a major selling point when the project goes to market.

The plan is for the Waterfront II development to have more than 540 residential units and 11,500 square feet of commercial space. It’s located at at 1978-2002 Lake Shore Blvd. W. in the Etobicoke-Lakeshore neighbourhood.

“We are not going to start sales until we get our approvals from the City,” said Greybrook Capital partner and Greybrook Realty Partners Inc. president and chief executive officer Peter Politis. “But we expect it to be over the next one to two years.”

Greybrook closed an equity investment of $35,025,000 by its managed issuer to acquire the property. The land was previously owned by Build Toronto, the city’s municipally owned development arm.

A zoning application for the property is with the City of Toronto. Politis said things are in the early planning stages and more information about the condo towers and mixed-use component of the development won’t be released until all of the details are finalized.

The estimated completion value of Waterfront II is $300 million.

Greybrook, Marlin Spring and other partners

This is the seventh collaboration between Greybrook and Marlin Spring in less than two years. Politis said his Toronto-based asset management firm’s development partner has committed a meaningful co-investment to the project.

“We look forward to doing a lot more with them,” he added. “They have a lot of diversified interests, both between high-rise and low-rise, which meets our core focus in things we want to invest further in.”

Greybrook and its affiliates have invested in more than 50 real estate projects in the Greater Toronto Area, Greater Golden Horseshoe region and South Florida markets. Its real estate investment portfolio is expected to result in the development of more than 17 million square feet of residential and commercial density with an estimated completion value of $8 billion.

Greybrook invested $9.25 million in The College at Spadina, a mixed-use development at 297 College St. in Toronto with 226 residential units and 28,955 square feet of commercial space. It partnered with Tribute Communities on the project, which was registered as a condo corporation in November 2016 and is now occupied.

“Our two high-rise towers in Liberty Village in partnership with Cityzen and Fernbrook are both out of the ground,” said Politis when asked about current developments his company has invested in.

Demolition and construction are also starting at Avenue & Park, a luxury 36-suite development in conjunction with Stafford Homes, at 1580 Avenue Rd. in Toronto.

They’re midway through construction of Towns of Cornell, a community of 200 freehold townhomes in Markham, Ont. being developed with Tiffany Park Homes and Andrin Homes. Other projects will also be starting soon in Markham.

“Greybrook is planning on being very active into 2018,” said Politis. “We currently have a number of properties that we have under contract, that we’re going through due diligence on to evaluate if they meet our investment underwriting criteria, with half-a-dozen of our different development partners.

“We see a strong 2018 for Greybrook on the acquisition side as well as on the disposition side. We’re excited to do a lot more in the next little bit.”