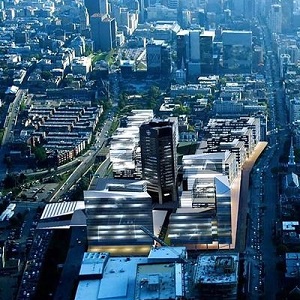 The project includes transformation of the CBC’s 24-storey Maison de Radio-Canada into office space, a hotel with up to 200 rooms on the upper floors and a conference centre. Surrounding it would be a number of buildings with more than 3,000 residential units comprised of condos and apartment units, additional office and retail spaces, a school and entertainment facilities.

Preliminary plans for the development near the Jacques Cartier Bridge were unveiled by Max Francischiello, president of the brokerage firm Asgaard Real Estate Services, which has Groupe Mach as a client.

Francischiello was speaking during a session about the city’s office market during the Montreal Real Estate Strategy and Leasing Conference on Oct. 30. Francischiello presented the project details in a video, without further commentary.

The public broadcaster sold the Maison de Radio-Canada, completed in the early 1970s, and the western part of its lot to Groupe Mach for $42 million. Groupe Mach is one of the largest office building owners in Montreal and Quebec City with a portfolio of 17 million square feet which includes the CIBC Tower and Place Victoria.

Francischiello’s firm is also working with Groupe Mach on the new $30-million, six-storey, 158,000-square-foot Montreal head office for Airbnb to be located on the Lachine Canal, among other projects.

“All in all, it’s been a very good year,” he said. “Going forward, the next 12 months, 24 months will be quite busy with almost four million square feet of redevelopment, whether it be retail, office or residential.”

Meanwhile, fellow Montreal builder Broccolini is developing a new CBC/Radio-Canada headquarters in Montreal for about $100 million next to the current site, which is slated for completion late next year. The new headquarters will have 418,000 square feet of leasable space in four- and seven-storey buildings.

During the session, Andrew Bissett, executive vice-president, tenant representation group at JLL said it has become difficult to find large blocks of leasable space downtown with only eight options available for more than 100,000 square feet.

In the last 12 months, 5.6 million square feet of office space has been leased in Greater Montreal, making for the strongest absorption since 2011, Bissett said.

There were some 465 leasing transactions, of which 78 per cent were for more than 10,000 square feet, and the technology industry has become the largest office leasing market. The trend toward higher rents should continue, he said.

While the Mile Ex/ Mile End and downtown areas are getting much of the attention when it comes to office leasing, there are leasing opportunities with good value in sectors “that lack the coolness factor,” Bissett said. These include Chabanel Street, Crémazie Boulevard, Nuns’ Island, suburbs and class-B buildings downtown.

Colin Worrell, managing director, leasing, Eastern Canada at Allied Properties REIT (AP-UN-T), said it is clear the Montreal commercial market is growing and the REIT’s decision to enter the market in 2005 has paid off.

The city is “a significant market” for Allied Properties, which now has 4.2 million square feet of space in Montreal, equivalent to its Toronto portfolio minus development and data output space.

The REIT is now redeveloping its first Montreal building at 425 Viger Avenue West, which has 300,000 square feet of leasable office space.

Allied Properties is also spending $50 million on capital expenditure improvements, such as new elevators and retrofits of common areas, at Le Nordelec, which it acquired in June 2016. Work should be completed within the next 12 to 18 months. With 781,000 square feet of office space, the Griffintown-Pointe Ste. Charles area property is 97 per cent leased.

Erik Langburt, senior vice-president, investment sales and leasing at Cushman & Wakefield, said co-working and flexible work environments “seem to be all anyone in commercial real estate is talking about.”

Salomon-Lima said that decision showed the versatility of Place Ville Marie, the iconic downtown office complex completed in 1962. “It brought freshness and a different perspective of what can be done in Place Ville Marie” and provided an opportunity to redefine office spaces and common areas in the complex.

“Buildings can evolve just like businesses can,” said Salomon-Lima, explaining Ivanhoé Cambridge’s decision to revamp Place Ville Marie’s esplanade and “elevate it to a higher level.”

Esplanade gets a major facelift

The esplanade serves as a common space for Place Ville Marie’s 2.5 million square feet of office space in its four towers. “That’s where connections are made,” he said. “For lack of a better term, we’re at centre ice.”

Work on the esplanade includes installation of a 50×150-foot all-glass panel to replace four skylights, the addition of a visually striking entrance to the food court and underground city, and a large staircase connecting the esplanade with McGill College Avenue.