The amount of commercial space leased in the Greater Toronto Area (GTA) in the first quarter was 6.9 per cent higher than a year earlier, with downtown offices playing a major part. 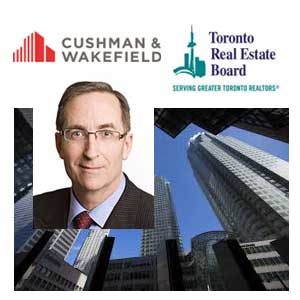 “In terms of downtown markets since the oil price drop, the Toronto market has been very much an island in Canada in terms of its resilience and overall strength,” Stuart Barron, Cushman & Wakefield national director of research and real estate finance research, said in response to figures published by the Toronto Real Estate Board (TREB). (Stuart Barron shown in image).

Banking and financial services, and the technology sector to a smaller extent, have been key drivers in leasing downtown space. Barron said about 1.4 million square feet of tenant-occupied space has moved from the suburbs and midtown to downtown over the past four or five years, further contributing to downtown growth.

The downtown and midtown office markets absorbed slightly more than 500,000 square feet in the last quarter while absorption in the suburbs was negative 482,000 square feet, according to Barron.

“We’re in the midst of what I refer to as the cycle of densification, where companies are addressing their space standards while going through this process to make themselves more efficient and more collaborative and all of those things,” said Barron.

“But it really drives down the square footage per work station, so you’re actually seeing growth even within the concept of reduced occupied space. That’s part of what’s containing the suburban market.”

The bright spots for suburban offices include Meadowvale, Oakville and Vaughan, which Barron called hot nodes because of their attributes supporting urbanization.

“Markets like Meadowvale have seen substantial growth because of their proximity to the GO Train and the 401 and the 407 and the access to Milton’s skilled labour force,” he said.

The total amount of office space leased in the GTA jumped by 34.9 per cent to 863,260 square feet on a quarter over quarter basis, according to activity reported through TREB’s MLS system. The average GTA office lease rate was $14.18 per square foot, compared to $12.54 last year.

Industrial space accounted for approximately three-quarters of the 6.38 million square feet of the GTA’s leased commercial space in the first quarter, and it experienced a three per cent quarter over quarter uptick.

Low interest rates, a devalued Canadian dollar and reduced energy costs are making the market an attractive place for American companies looking to move into or expand their footprint in Ontario, which could account for some of the heavy leasing activity.

TREB’s research showed the average lease rate dropped to $4.93 per square foot from $5.40 for the same January through March period a year earlier. Barron, however, expects rents to rise.

He said the GTA industrial market had 9.1 million square feet of absorbed space in 2015 after averaging 2.8 million in the five previous years and the vacancy rate has fallen to 3.5 per cent, the lowest in several years.

“When you get these low vacancy rates, you’re going to begin to see upward pressure on rental rates. Most of the new developments in the industrial sector have been the big box solutions for the large e-commerce distribution type of companies.

“But because vacancies are now so tight, we’re going to see demand begin to push rental rates, which will justify the development of smaller box ranges, particularly in the GTA West. This is going to provide solutions for tenants in the 30,000 to 100,000 square foot range more effectively.”

The first quarter commercial/retail lease rate slid to $19.08 per square foot from $19.30 as the amount of space leased increased by 8.1 per cent, according to the TREB report.

“The luxury good companies and retail outlets have been doing very well, and lower end retail has done very well if you look at the expansion of dollar-type stores, but the guys in the middle have been hurt a little more,” said Barron. “We’re seeing movement in the middle and seeing challenges in that middle ground.”

Barron added a similar formula can be applied to shopping centres as well as individual stores.

“Higher-end super malls continue to be more successful while second tier malls are being more challenged from a sales perspective.”