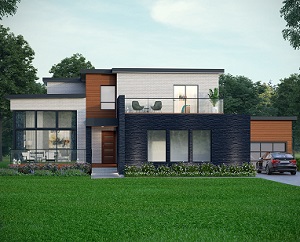 “We’re definitely pushing the envelope on the modern design side and with the technology and efficiency of these homes,” said Mark Wadden, president and chief executive officer of Blue Elephant Group Inc., which is overseeing marketing and sales for Eden Park.

Ajax, Ont.-based Fourteen Estates is a high-end custom home builder which is moving more into production housing. It wants to make a statement with Eden Park.

The homes will have few interior load-bearing walls, which facilitates large, open-concept layouts and can easily accommodate future additions or reconfiguration of spaces.

Each home will be built using BONE Structure’s integrated design protocol, which examines factors such as window placement, orientation and elevation to utilize natural elements such as sunlight as energy saving sources. Steel-frame houses are resistant to rot or mould and the steel structure is fully recyclable.

The houses will be net zero-ready, utilizing a high-performance building envelope that maximizes energy efficiency and can reduce heating and cooling costs by up to 90 per cent.

“People are becoming more cognizant of the energy they’re using, not only from an environmental standpoint but from a cost standpoint,” said Wadden.

“The BONE Structure architectural design team leans to more modern design and flat roofs, which are good from an aesthetic standpoint and an efficiency standpoint. A-frame roofs aren’t efficient. We’ve been doing them for hundreds of years but there’s nothing efficient about them. There’s a lot of wasted space there that you’re heating, and you’re losing energy.”

The homes can be upgraded to net zero, which means they produce as much energy as they use, by adding an alternative energy source. A promotion is being run now whereby people who purchase a home in Eden Park will receive a Tesla Powerwall, which integrates with solar panels to store excess energy generated during the day and makes it available when needed, minimizing reliance on the power grid.

Cassidy & Company Architectural Technologists has done a lot of work with Fourteen Estates over the years and played a major part in the design of the houses, in collaboration with BONE Structure. The homes will feature lots of windows, neutral tones, and stone and brick detailing inspired by nature.

Eden Park is a seven-minute drive from grocery stores, pharmacies, coffee shops and restaurants in Newcastle, and 15 minutes from a larger range of urban amenities in Bowmanville to the west and Port Hope and Cobourg to the east.

Blue Elephant has already sold eight homes after a soft launch and will release the remaining lots in the new year after a model home is completed.

The precision-designed homes can be completed in a much shorter time frame than with conventional construction methods. Wadden said it takes from three to four months from when a purchaser signs the sales paperwork to the time the house is built and ready for move-in. First occupancy for Eden Park is expected in late March or early April.

“BONE Structure makes everything air-tight and finishes the shell, and then Fourteen Estates comes in to do its thing, which is finish off the project,” said Wadden.

The homes will include top-of-the-line appliances and finishes. Optional upgrades are available, including a Crestron whole house audio and automation system, a closed-circuit security system, security intercom system and home theatre options.

In addition to building one-off custom homes, Fourteen Estates is also developing three communities with more traditional estate-styled homes. Barclay Fieldstone Estates in Pickering is sold out of its 38 homes, while Hamptons in Clarington and Honey Harbour Heights on the waterfront in Port Perry are mostly sold.