Canada enjoyed its third-richest year for hotels deals in 2015 and Colliers International’s 2016 Canadian Hotel Investment Report predicts more of the same this year. 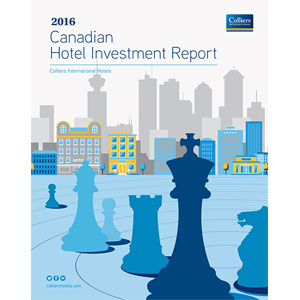 That optimism is driven by increased interest from foreign buyers, the strength of Toronto and Vancouver markets, the need by some hotel players to better balance their portfolios by geography and by strong continued lender interest in the sector.

With the possible exception of oil-wracked markets, chiefly Alberta, the Colliers report predicts “continued momentum in trading activity this year” that will create “a steady investment environment.”

Colliers tallied Canadian hotel transaction volume at $2.46 billion in 2015 in 147 transactions, the third-highest recorded and the highest in the current price cycle. That represents the highest volume since 2007, the year CHIP REIT and Legacy REIT were both taken private.

“It was a great story in terms of not only in volume, but pricing, diversity . . . ,” said Robin McLuskie, Colliers’ vice-president of hotels. “It wasn’t just one buyer dominating and buying everything, it was a real strong mix of buyer categories. It was a very healthy market.”

The hotel sector set a record for single-asset transactions over $25 million with 17 (there were 14 the previous year), demonstrating an “appetite for larger urban full-service assets” in this current up cycle.

Average per-room pricing of $114,300 represented a 23 per cent increase from the previous year, which showed “strong market fundamentals and quality of assets” changing hands.

Eastern Canada represented 53% of transactions, with Ontario accounting for 39% of national volume ($967 million versus $505 million the previous year).

Last year was marked by some major sales. The top five by publicly reported price:

• The Westin Bayshore purchased by Concord Pacific from Starwood Capital Group Global LP for $290 million;
• The Fairmont Royal York Hotel, bought by KingSett Capital and InnVest REIT (INN.UN-T) from Ivanhoe Cambridge (which retained 20%) for $186.5 million;
• The Courtyard by Marriott Toronto Downtown bought by KingSett (66%) and InnVest (33%) from Groupe Jesta for $99 million;
• The Westin Prince purchased by Wufeng Construction Group for $70 million from Spa and Resort Operations Ltd.;
• The Best Western Primrose Hotel bought by Knightstone Capital and HOOPP from Arsandco Investments Ltd. for $50.5 million.

The majority of this activity was due to U.S. sellers motivated by disposing assets in order to focus on their own domestic growth.

Asset appreciation in urban areas was a bright spot, particularly as it relates to Toronto and Vancouver where overall real estate values have seen rapid growth.

On the buyer side, hotel investment companies (HICs) were the most active buyer group by transaction volume and number of rooms with 46 deals totalling $831 million (or 34% of volume).

HICs were the most dominant in the full-service segment acquiring 29 properties for $661 million. Private investors accounted for the largest number of acquisitions (76 transactions totalling $490 million or 20% of volume).

They were the most active in the limited-service space where there was “an abundance of opportunities,” particularly in secondary and tertiary markets.

Foreign investors acquired 27 Canadian hotels in 2015 representing $515 million (21% of volume). There was significant interest behind the scenes with foreign-based groups actively underwriting and bidding on prime offerings.

The largest and most notable acquisitions include the 22 property Fortis Canadian Hotel Portfolio which was acquired by a Westmont-sponsored partnership backed by American capital as well as The Westin Prince Toronto, which sold for $70 million to an investment group based out of Mainland China.

Read next week’s edition of Property Biz Canada to learn how the hotel industry is responding to Airbnb and other similar companies.