The Université de Montréal is getting a new campus on a site that will include about 1,600 new housing units and the potential for one million square feet of office space. 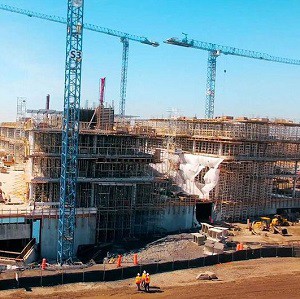 Campus Mil will be located on former train yards in the Montreal borough of Outremont and is equivalent to 50 football fields. It borders Plateau Mont Royal, Mile Ex and Park Extension neighbourhoods of Montreal and the Town of Mount Royal.

The university bought the land in 2006 “with the idea of designing a new type of campus that’s integrated into its urban setting,” says Guy Breton, rector of the Université de Montréal. The university has been grappling with a lack of space at its existing campus on the northern slopes of Mount Royal.

Campus Mil will accommodate 3.2 million square feet of built space, about 10,000 students and staff and thousands of residents.

The Mil name signifies the Middle of the Island of Montreal where the campus is located. It also stands for Montreal, Innovation and Laboratory.

A 646,000-square-foot science complex is under construction and is set to open in fall 2019. It will house the chemistry, physics, geography and biology departments.

The new campus is costing about $350 million, with the federal government providing $84 million, the Quebec government paying $145 million and the Université de Montréal $119 million.

By integrating a former no man’s land into the city, the new campus is leading to a renaissance of surrounding neighbourhoods, Breton told the audience at the Montreal Board of Trade’s recent Strategic Forum on Major Real Estate Projects.

Breton says the university has set up L’Extension, a clinic at Campus Mil that serves underprivileged children from nearby Park Extension. It was established in collaboration with the university’s medical, dental and optometry schools.

The university will soon release a public tender to sell land it owns on the site for residential housing. About 800 housing units will be built, of which 15 per cent will be set aside for social housing and 15 per cent for affordable housing.

Another 800 housing units are planned on land owned by the City of Montreal which will soon become available. Some 15 per cent of the site will also comprise social housing and 15 per cent affordable housing.

The site has the potential to house one million square feet of office space, says Russell Copeman, who is responsible for housing and urbanism and management of real estate properties at the City of Montreal. It will also have more than 12 acres of green spaces.

Montreal has invested $210 million on decontamination and infrastructure work at the site.

The site is being designed to encourage public transit, with only 100 parking spots. Copeman estimates 80 per cent of students and residents will get around on foot, bike or by public transit. The site is served by the Outremont and Acadie Métro stations and will be integrated into the city’s network of cycling paths.

He adds the site is seeking LEED certification for neighbourhood design.