The ICE District is leading a rejuvenation in downtown Edmonton — and making a major impression in the city’s office market. 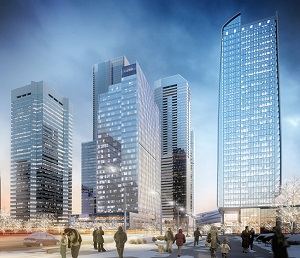 The ICE District in Edmonton is leading a rejuvenation in the city’s downtown. Its two office towers are both more than 90 per cent leased and one of them is still being constructed. (Rendering courtesy ICE District)

“The concept is resonating with everybody,” says Glen Scott, president of Katz Group Real Estate, which is developing the 25-acre, mixed-use site. “It’s the reboot of the downtown of Edmonton.

“What is unique to the ICE District is the integrative components, which is the largest mixed-use development certainly in Canada and maybe in North America.”

At the heart of the development are two office towers – one completed and the other under construction – which are more than 90 per cent leased. This in a city where Avison Young reports a downtown Q3 office vacancy rate of 17.2 per cent, up from 13.1 per cent in 2016.

The Edmonton Tower office skyscraper at ICE District was completed about a year ago and more than 90 per cent of the 27-storey, 610,000-square-foot structure is leased. The City of Edmonton is the anchor tenant.

The Stantec Tower, scheduled to be completed next year, is about 95 per cent leased for its 622,596 square feet of office space. On Friday, Scott and other officials celebrated the latest construction milestone for the Stantec Tower, with the official topping-off of the commercial level.

Above the office component to the Stantec Tower will be 37 storeys of residential condos – 483 units with prices ranging from one-bedrooms at $315,000 to a two-bedroom penthouse at about $1.3 million.

Once complete, Stantec Tower will be Canada’s tallest building west of Toronto, standing 66 storeys and 251 metres. In addition to Stantec employees and SKY Residences’ occupants, the tower will also contain tenants such as PwC, Dentons, DLA Piper and others.

SKY Residences will be ready for occupancy in 2019.

“This commercial level topping-off is an important milestone that recognizes the extensive work and meticulous planning that has gone into Stantec Tower,” says Scott. “It is an honour to be a part of a project that will shape the City of Edmonton and be an exemplary contribution to Edmonton’s skyline.”

Scott says the JW Marriott hotel is expected to open in early 2019.

JW Marriott Edmonton will feature 356 rooms and suites, more than 25,000 square feet of state-of-the-art meeting and conference space, and one of the city’s largest ballrooms (more than 10,000 square feet) with access to an outdoor area overlooking the ICE District Public Plaza.

ICE District’s first luxury hotel tower will exceed 50 storeys in height; the first 22 storeys will be hotel space, with The Legends Private Residences above the hotel.

JW Marriott Edmonton will be just the third hotel in Canada under the JW Marriott brand when it opens.

Scott says the Public Plaza will be about 75 per cent open next November, with the remainder to open when the Cineplex Cinema is complete in about 24 months. Construction has just begun on the cinemas.

“Retail is coming along great,” says Scott, adding collectively 350,000 to 400,000 square feet will be located throughout ICE District.

The catalyst for ICE District started with Daryl Katz, when his Katz Group partnered with the City of Edmonton to build Rogers Place, now home to the NHL’s Edmonton Oilers and other major entertainment events.

Katz Group has been involved in land assembly, site and building development across Canada and the United States for over 15 years. In addition to ICE District, KGRE’s real estate portfolio also includes approximately one million square feet of retail-based commercial shopping centre space across the country.

In 2012, the Katz Group partnered with ONE Properties on the master-planned ICE District project which, when built out, will include more than 25 contiguous acres of downtown Edmonton.

The developers say Phase 1 will include 1.3 million square feet of class-AAA office space, more than 1,300 sophisticated residential units, an estimated 4,000 underground parking stalls and 300,000 square feet of retail space. ICE District will be a pedestrian and vehicle-friendly development, offering easy access to five LRT stations and connections to the existing pedway system.