The final phase of William’s Court at Kanata Lakes, the largest rental apartment complex built in Canada in more than 40 years, has been sold by developer Francis Lépine’s Lépine Corporation to Killam Apartment Real Estate Investment Trust and KingSett Capital. 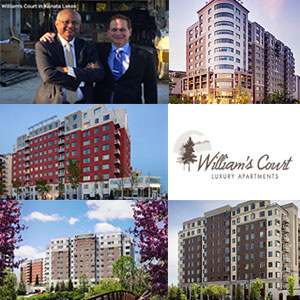 Five luxury apartment buildings totaling 739 units — along with an 18,000-square-foot clubhouse featuring an indoor saltwater pool, state-of-the-art fitness centre and leisure facilities including a spa-inspired lounge area — have been built on the five-acre site in the Ottawa suburb of Kanata since Lépine first broke ground in 2010.

“You could not deliver 739 units all at one time,” said Derek Lobo, chief executive officer of SVN Rock Advisors Inc., which brokered the deal as part of a forward sales process.

“The market wouldn’t absorb it and the amount of money needed would be tremendous. So, for capital and lease-up reasons, it needed to be staggered and built in phases.”

The final two buildings, located at 1203 Maritime Way and 985 Great Lakes Ave., include 268 units and were completed in December 2015 and April 2016 respectively. The purchase price of almost $100 million brought the total value of the deal to more than $250 million.

“KingSett got involved in the last two years and they have been great partners,” said Killam president and chief executive officer Philip Fraser in a video about William’s Court at Kanata Lakes. “Their deal flow is second to none and working with them on acquiring these assets has been very straight forward and smooth.”

“Our long-term core fund is focused on a long investment horizon,” said KingSett partner and co-head of investments Joe Mazzocco in the same video. “Therefore we are focused on very high-quality purpose-built product.

“To be able to acquire product constructed by the Lepine Corporation, which has a fantastic reputation for constructing to the utmost quality, excited us very much.”

William’s Court at Kanata Lakes’ buildings are 96-per cent leased with an average rental rate of $2,160 per unit, according to the 2016 year-end report from Killam, which also manages the property.

SVN was involved from the start

“We got hired to do the initial feasibility study by Francis nine years ago,” explained Lobo, which was also involved with the lease-up, marketing and sale of each apartment.

“We thought there was a market there and came back with some early concepts. We thought people would want large units and not downtown condos. They were going to want amenities. Some of them were probably going to be older.”

Lobo said each apartment building leased up faster than its predecessor as the partners better understood what the marketplace wanted, and the buildings’ suite sizes and mixes were adjusted to reflect that.

“When you have a site this big, you’re going to get a mixed bag of units and renters,” said Lobo.

Lobo said the ultimate suburban urban hub in Canada is around Oxford Properties Group’s Square One Shopping Centre in Mississauga, Ont., but that they exist on a smaller scale in several Canadian cities.

These types of locations are just one of the many factors driving the recent resurgence in new purpose-built rental apartments after their construction stalled, especially in Ontario and Quebec, after the introduction of rent controls in the mid-1970s. But times are changing, according to Lobo, who concedes that all of the conditions may have not been quite right when he started advocating for the construction of new apartment buildings almost 20 years ago.

“We’ve had such a strong condo market that I can’t blame developers for building and selling condos,” he said. “But now I think that people are seeing that there’s a real opportunity here.

The players in the deal

Groupe Lépine was formed in Montreal in 1952 by René Lépine, who passed away in 2012. It’s now headed by his son Francis. The parent company’s Lépine Corporation and Groupe Lépine International have been involved in dozens of real estate development projects in Canada, Florida, eastern Europe and the Caribbean.

Halifax-based Killam is one of Canada’s largest residential landlords. It owns, operates and develops multi-family apartments and manufactured home communities and has a $2-billion real estate portfolio.

KingSett is a Toronto-based private equity real estate investment firm focused on major Canadian markets that co-invests with institutional and high net worth investors to achieve premium risk-weighted returns. It manages assets of $6.7 billion in a $9.2-billion portfolio.

SVN is a boutique brokerage firm focused on multi-family asset classes, including apartments, student housing, multi-family land and new apartment construction. The Burlington, Ont.-based company has handled 22 new apartment sales and Lobo said it will be involved in more this year.