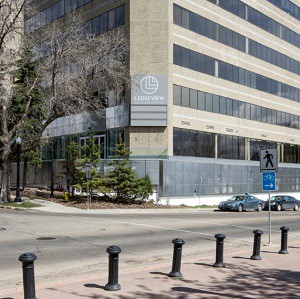 The Ledgeview Business Centre in Edmonton.

The former Capital Palace building at 9707 110th Street was constructed in 1980. The property was losing tenants before Hungerford purchased it in 2014 but since then, more than $6 million has been invested in its modernization, renovation and rebranding.

Hungerford’s philosophy is to get class-A performance from the class-B building.

“The building had been neglected in some respects (before Hungerford bought it). They had to get the building up to being on par, but they went above and beyond,” said Phil Goh, senior-vice president at Colliers International in Edmonton, which has handled the leasing.

“The landlord is offering full-term key packages with a substantial inducement allowance that (means) you often can get your space built out for you at attractive rates.

“Those factors, along with the momentum they got, made the building a very compelling asset to seek out.”

The building is currently able to accommodate office tenant requirements ranging from 1,328 to 6,451 square feet, and retail tenants at 2,391 square feet. The spaces can be customized to suit tenants’ business needs.

Having a nearly full building with several retail options not only provides services to the surrounding area, but also adds to the allure of the overall amenities provided for tenants.

Ledgeview has attracted a diverse group of tenants ranging from legal groups such as the Alberta Counsel, to recent additions Belair and soon-to-open The Butternut Tree, a 58-seat, full-service, fine-dining restaurant on the ground floor.

Goh said the wide range of amenities include a common area boardroom, underground bike facility and prime location on the edge of downtown with river valley access.

A slow economy, due in part to weak oil prices, has meant capital investment is not easy to come by in Alberta. However, Hungerford Properties partner Michael Hungerford said his company believes it’s important to invest when times are tough, and put forward a service-oriented philosophy in order to build confidence.

“Of course, businesses are cautious when there are things they cannot control affecting their performance,” said Hungerford. “New tenants have choices. There are plenty of options in the market for them to look at, but relocation is expensive.

“If you have built a relationship with your tenants, invested in the building, and they see it and benefit from it on an ongoing basis, it puts you in good standing when they’re looking for options.”

Located in Edmonton’s government district, Ledgeview is in a high-density area which suffers from a lack of retail options. Previously, the closest restaurant was three blocks away.

Through the addition of restaurants and more retail, Ledgeview is bringing diversity to the area and this is also playing a factor in attracting new tenants. The district offers another benefit; leasing costs would be higher if prospective tenants were to consider renting in the city’s financial district.

The most recent contracts bring Ledgeview Business Centre to just over 72% leased.

The new tenants have signed standard five-to-10 year leases, showing confidence in the location and its ability to succeed while Alberta works to resolve its economic issues.