These are exciting times for Lennard Commercial Realty. The Toronto-based firm has doubled its staff during the past five years, relocated to a larger head office to accommodate its growth, and was honoured by NAIOP for a creative lease solution for one of its clients in 2017. 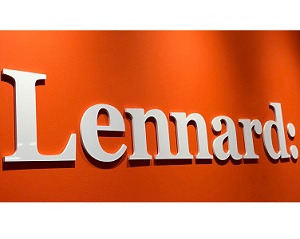 “It’s really the full gamut of styles of projects. We’re a full-service brokerage.”

Lennard Commercial Realty is an independent Canadian commercial real estate brokerage offering a range of real estate services to occupants, tenants, owners and investors in the office, retail, industrial, land and multi-family sectors in the Greater Toronto Area, across Canada and North America.

Lennard Commercial Realty moved its downtown Toronto head office in June from Adelaide Place at 150 York St., which it had outgrown, to an 18-storey building at 55 University Ave. that’s changed ownership twice during the past year.

“This is a much bigger, brighter and better work environment for everybody,” said Russell.

The downtown expansion, however, doesn’t mean there will be consolidation with its other GTA offices in Mississauga and Markham.

“Mississauga is expanding later this year and our Markham office has grown from two people to 20 in the last four years, so we expect that they’re going to continue to grow,” said Russell. “And we’ll be adding locations in the Greater Golden Horseshoe.”

Lennard Commercial Realty has also launched a corporate rebranding to coincide with its growth to more than 80 employees. It started with the company’s website and is being rolled out into marketing materials, including signage, property flyers, stationery and sales items.

“It’s to reflect our philosophy and our approach, which is a little different,” said Russell.

“We have quite an emphasis on work-life balance, freedom of work style, collaboration, equality of opportunity and a sense of humour. So we’ve come at it a little less seriously in terms of the office environment and philosophy, which we think allows people to work more effectively together. Our new branding reflects that.”

Lennard Commercial Realty’s emphasis on work-life balance and office fluidity is a big part of its appeal to attract and retain employees.

“The first line of our philosophy states that ‘Family comes first before business,’ ” said Russell. “That’s something that’s resonated with a lot of people.”

Since people like to work in different ways at different times of the day, Lennard Commercial Realty offers private offices, collaborative work stations and work-from-home options.

“We try not to put too many strictures on them and eliminate red tape and politics of any kind and make it easy to work and fun to work together,” said Russell.

Russell said the company’s commission splits are “the best in the business” and that its salespeople receive cutting-edge technological support.

“We completed a partial demolition of the existing building, which involved some relocation of work processes within the existing facility,” said Lennard Commercial Realty founding partner and broker Dan Hunt. “The new building was then constructed on the vacant and newly demolished portion of the site.

“This allowed for a continuation of workflow during the new construction period, but also eliminated some of the recertification obligations that would have been required if we had moved off-site, even temporarily. The tenant also built up inventory on the parts side so they could accommodate the demo and relocation, which also worked to remove any risk of business disruption.

“Significant research of the tenant’s business, combined with extensive pre-planning, allowed this to run smoothly. One of our team had and continues to have oversight on the project management side of this transaction.”

Lennard Commercial Realty has also been a nominee for Canada’s 10 Most Admired Corporate Cultures for several consecutive years.

“We’ve been approached many times by commercial networks that are North American-wide, or worldwide, and been asked to join,” Russell said. “But none of them have been a very good fit with us, so we decided to create our own.

“It’s a collection of individuals we know across the country in different centres that we call upon for certain types of projects. It really doesn’t matter what company they’re with. We’re choosing the best individual that we can.”

Lennard Commercial Realty was founded in Calgary in 1980 by Gordon Lennard and its Toronto office opened in 1983. Russell joined the company a year later and moved to Toronto in 1986 to build its team there.

Russell was joined shortly thereafter by Andy Baker and Hunt, and the trio purchased the company in 1999. A Calgary operation is still running as Lennard Corporation, which owns and operates First Executive Centre in the city and is headed by Beth Lennard.

“We’re still friends and we do some business together and we have a great relationship, but there’s not an ownership relationship,” said Russell.