Ken Greenberg has what he calls a “breakthrough idea” to address the needs for affordable housing and jobs and to leverage the massive public investment in GTA transit infrastructure. 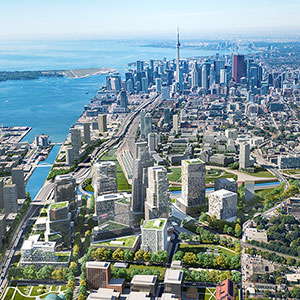 A vision of East Harbour in Toronto courtesy of First Gulf.

“It is something I call ‘subtractive urbanism,’ applying a sunset provision to a regulatory framework which is no longer serving its purpose,” the renowned urban designer and principal of Greenberg Consultants Inc. said at the Land and Development Conference in Toronto on Tuesday.

Greenberg says the “Kings initiative” launched by Mayor Barbara Hall after she was elected in 1997 is a historic precedent for his proposal. City council at the time agreed to lift the planning restrictions on two blocks of old industrial land totalling 400 acres: at King Street and Parliament Street, east of downtown Toronto; and at King Street and Spadina Avenue on the west side of the city.

“Without expenditure of public money, 50,000 housing units were created in 20 years but even more interesting, more people are working in King Spadina and King Parliament now than in the industrial era,” said Greenberg.

The regulation Greenberg cites as holding up progress is an “employment lands” planning designation applied to large blocks of historically industrial property by the City of Toronto and other municipalities throughout the GTHA, a policy supported by the Province of Ontario.

The provincial Places to Grow 2017 policy framework which provides planning direction for the Greater Golden Horseshoe Area has a “striking internal contradiction,” according to Greenberg. One section of the report acknowledges the changing nature of work and the value of mixed-use development.

Another section of the report protects the homogeneity of older industrial areas and prohibits the construction of more contemporary work environments.

“The designation prohibits desirable forms of mixed-use in many strategic areas experiencing transit investment throughout the region,” Greenberg said in a CBI policy paper titled More than a desk and a parking spot: Tapping into the Region’s Employment lands.

“Mixed-use fulfills a growing and undeniable desire for the kind of lifestyle that comes with the convenience of living and working in the same fine-grained urban neighbourhood setting. Both employees and employers are seeking walkability and integration.”

Greenberg acknowledged there is reason to protect some of the “employment lands” for older-style industry, but he contends those located along the transit lines and close to transit stations should be changed.

Triage for land with development potential

He is proposing “a kind of triage” to identify areas where planning regulations can be removed and others can be preserved for traditional employment. Greenberg is calling for a political decision reminiscent of the Kings Initiative which bypasses the province’s five-year planning policy review process.

“We would then release thousands and thousands of acres throughout the greater Toronto and Hamilton area which would provide affordable housing in areas where it is most needed and industrial lands where it would be most needed,” Greenberg said at the conference. It would also create jobs.

“We would leverage the enormous investment that Metro is making in our transit system.”

To illustrate the opportunity, Greenberg pointed  to maps prepared by the Neptis Foundation which provide an overlay of metro Toronto’s transit plan onto areas zoned as “employment lands.” The maps are created with a handy online tool for analyzing land use and transit systems called Neptis Geoweb.

“A large number of the transit stops are in the employment land designations because that is where the rail sidings were and where the industries were. In all those areas, mixed-use is prohibited. It is prohibited in the municipal plans. It’s prohibited by the province,” said Greenberg.

The re-imagining of the 60-acre Unilever site east of downtown Toronto, now marketed as “East Harbour,” is cited as an example of the potential for turning underutilized industrial land into intensified urban development. The development is being led by First Gulf and is one of the largest in Canadian history.

The site has a major new Go Station as well as being connected on the city’s LRT line. The vision for the site is to employ up to 50,000 people across some 11.5 million square feet of office and also include a significant residential component.

The closest international parallels to East Harbour are Canary Wharf in London and Hudson Yards in Manhattan.

A more typical example of an underdeveloped industrial area on a transit line in the GTA is at St. Clair Avenue and Weston Road. According to Greenberg’s CBI policy paper, for historic reasons relating to its former industrial use, the majority of the lands surrounding the “transit hub” are designated Employment Lands.

Greenberg says mixed-use is largely prohibited at St. Clair and Weston Road despite landowners who would like to combine forces to leverage the transit investment with a combination of living and working spaces in a compact, transit-oriented, walk-in form.

Greenberg wasn’t able to provide an estimate of the total area or number of transit stops that would be impacted by the proposed change.

“It deserves a careful look because the truth is most of the housing in this city, in this province, will be provided by the private sector no matter how much more we do in terms of social housing. It would be an incredible opportunity to release the energy of the private sector on the housing front and on the jobs front and take most advantage of the transit investment we are making.

“I keep bumping into this in my work, working with multiple developers throughout the entire city region,” Greenberg said. “It’s obvious we should be doing it.”

In the opening session of the Land and Development Conference, Toronto Mayor John Tory called upon the private sector to step up with solutions to the affordable housing challenge and support Metro’s ambitious transit plan.

This could be one of those “something bigger” opportunities for the mayor to consider for his campaign platform in the municipal election this fall, Greenberg hinted.

Ken Greenberg is an urban designer, teacher, and writer and was a former Director of Urban Design and Architecture for the City of Toronto. He is a multiple award-winning planner with a career spanning four decades and now the Principal of Greenberg Consultants Inc.