The number of Canadians over the age of 75 is expected to double over the next 20 years, and Sienna Senior Living Inc. (SIA-T) believes it will be ready to house many of them. 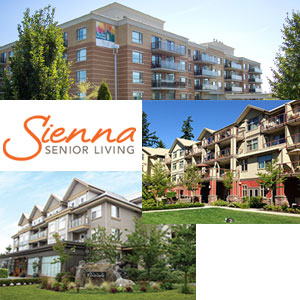 “There’s demand and we’re a high-quality provider and a good operator, and we know both retirement and long-term care, so we’re very well-positioned to be part of that growth,” said president and chief executive officer Lois Cormack, who joined the holding company three years ago.

The company and its predecessors have been operating since 1972. It was incorporated as Leisureworld Senior Care Corporation in 2010 and closed its initial public offering of common shares on the Toronto Stock Exchange in March of that year. The new name was adopted last May as part of an overall rebranding.

“The old name was inconsistent with the new direction and needed a repositioning,” said Cormack, citing a refreshed vision, mission and values for the Markham, Ont.-based company.

Properties in Ontario and British Columbia

Government-regulated long-term care facilities accounted for about three quarters of Sienna’s 2015 net operating income, and the company is the largest owner and operator provider of licensed long-term care in Ontario. The average size of its long-term care homes is 164 beds, well above the provincial average of 125, which further enables it to achieve efficiencies and economies of scale.

The long-term care sector is comprised of private and public operators and not-for-profit organizations. While consolidation has taken place in recent years and is expected to continue, ownership remains relatively fragmented.

Sienna’s same property net operating income for its long-term care facilities rose by 1.8 per cent last year as it converted more of its beds to the higher priced “class-A private” category. That conversion is continuing this year.

As part of Sienna’s retirement residence rebranding last year, it enhanced its marketing and sales operations and also improved its care services, culinary experiences and leisure programs at its eight Ontario and three B.C. locations. This resulted in a 13 per cent increase in same property net operating income over 2014 and an occupancy rate increase from 86.8 to 93.6 per cent.

“The retirement residence margin is greater,” said Cormack. “It’s a higher risk, but has a higher margin. Long-term care is very stable and predictable and we’re very good operators.”

Sienna completed the $37-million acquisition of the 140-suite independent and assisted living Traditions of Durham residence in Oshawa, Ont. from Durham Retirement Residence LP at the end of last year.

Further acquisitions will be determined by such factors as Sienna’s ability to identify suitable targets, competition for opportunities, purchase price, ability to obtain adequate financing on reasonable terms, financial performance of the businesses after acquisition, and the ability to effectively integrate and operate the acquired businesses.

Sienna owns 12 older long-term care homes it plans to redevelop and upgrade, and retirement residences will be added to some of them.

A respectable balance sheet and corporate reputation help give Sienna the wherewithal to finance further growth, according to Cormack.

“Anyone who invested with us when we went public has had a very, very solid return,” said Cormack.

“Our investors and shareholders should be happy. We’ve had good growth on all fronts.”